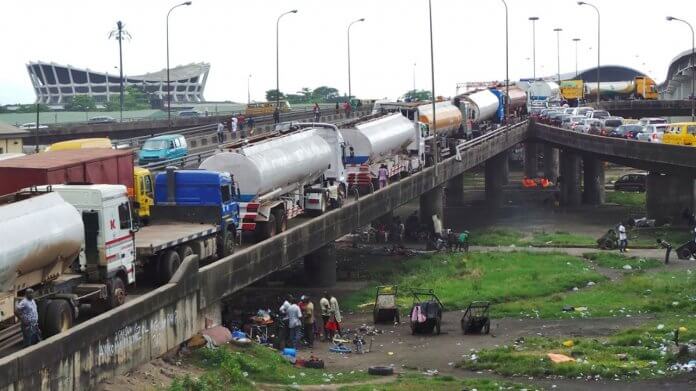 The Federal High Court in Lagos on Monday fixed May 6 for judgment in a suit by activist-lawyer Mr Femi Falana (SAN) against the Minister of Works Babatunde Fashola (SAN) and the Federal Road Safety Commission (FRSC).

Falana is praying the court to order the removal of all obstructions on the Oshodi-Apapa Expressway, including deadly trailers and tankers, and to repair it.

Falana is also seeking a declaration that “the parking of tankers and trailers on the overhead bridges in Lagos is illegal and unconstitutional”.

He said such acts “constitute a threat to the fundamental right to life of the applicant and other motorists” as guaranteed by Section 33 of the 1999 Constitution and Article 4 of the African Charter on Human and Peoples Rights.

Falana, a former Committee for the Defence of Human Rights (CDHR) National President, sued the defendants over the deplorable condition of the Oshodi-Apapa Expressway.

He is seeking a declaration that the respondents’ failure to remove obstructions on the road and to repair and maintain it is illegal and unconstitutional as it constitutes a threat to his fundamental right to life.

He said the failure to make the road safe for motorists violates his and others’ right to freedom of movement guaranteed by Section 41 of the 1999 Constitution.

In a supporting affidavit, the SAN, who was a former West African Bar Association (WABA) President, said many of the federal roads across the country were in very bad shape, including the Apapa-Oshodi Expressway.

“I also know as a fact that the traffic situation on the Oshodi-Apapa Expressway today is unbearable and a dreadful risk to lives of the motorists plying through the roads,” he said.

The applicant said the deplorable state of the expressway “has in recent times caused multiple deaths through recurring accidents”.

According to him, commuters plying the road risk their lives due to the heavy-duty vehicles that are stranded on the road “due to the level of dilapidation”.

“Vehicular movement along the road has become a misadventure and a nightmare that the applicant often regrets venturing into each time he plies the road.

“Long before the bad and dilapidated state of the road, it used to be less than 30 minutes’ drive from Oshodi to Apapa, but now the traveling time exceeds one hour,” the applicant said.

Falana said last February, while traveling back to his Ikeja office after a prison visit, he almost had an accident whilst navigating through a big gallop on the road and almost hit an oncoming vehicle.

The applicant sought an order directing the respondents to remove all obstructions on the expressway and to repair and maintain it forthwith.

Falana prayed the court for a declaration that he is entitled to his fundamental right to life guaranteed by the Constitution and the African Charter.

But, in its response, the Minister of Works denied Falana’s claims, saying the road “is under rehabilitation”, adding that it was not the cause of the gridlock in the axis.

Fashola, in an affidavit deposed to by a litigation assistant in the Ministry of Power, Works & Housing, Ayodele Otedola, claimed that a suit filed by the Road Transport Employers Association of Nigeria “has since 2010…caused the slow progress of work to rehabilitate the road for efficient use of motorists.”

The first respondent said Falana’s claims were not true, adding that the Apapa gridlock “is always caused by tanker drivers who normally follow the route to the port for the purpose of loading and offloading their goods”.

Fashola said: “The failure of the first respondent to repair the road as alleged by the applicant has not in any way restricted or breached his freedom of movement.”

The Minister of Works said Falana’s life was not under threat; that failure to fix the road was due to “paucity of funds”, and that the rights sought to be enforced were not justiciable.

“The applicant has no locus standi to sue as he is not representing a class action and on whose behalf he is suing. He has not shown that he has suffered over and above other motorists and people that use the road,” the minister said.