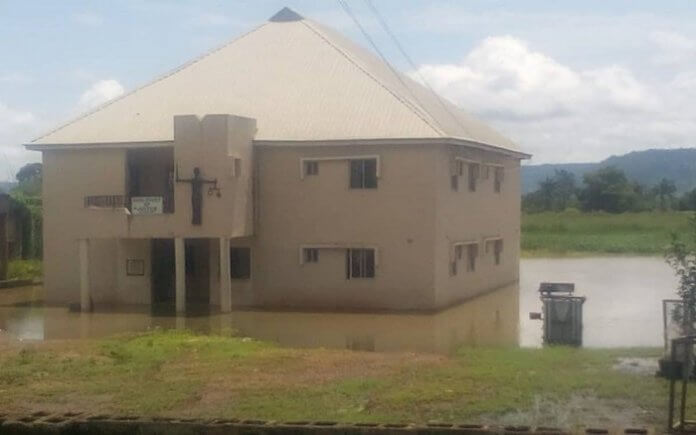 The Koton-Karfe High Court and Magistrate Courts in Kogi State could not sit on Wednesday as the entire court rooms were overtaken by flood arising from backward flow of River Niger.

Koton-Karfe is the headquarters of Kogi Local Government Area of the state.

The court premises along  Okparakpe Road in the town were completely submerged by water overflowing  from River Niger in early hour of Wednesday.

The Chief Judge of Kogi State, Justice Nasiru Ajanah, who was on a spot assessment  of the  premises   ordered  the immediate  relocation of the High Court of Justice and Magistrate Court to another place.

Justice Ajanah explained that he would inform the state governor, Yahaya Bello about the incident. He stressed that flooding had become a recurring incident in the area lately.

The Chief Judge stated that the step taken had become necessary to accelerate the dispensation of justice in the area pending the time the water would recede.

He pointed out that he had earlier informed the traditional ruler of the town, Ohimege-Igu  of Koton-Karfe, His Royal Majesty, Abdulrazaq Isah Koto on the possibility of relocating the court premises as a result of incessant flood in the area, adding that he would like to remind him again .

The High Court  Judge , Justice Alaba Ajileye and other workers had earlier reported for work on Wednesday but were kept  at bay because of flooding from River Niger.