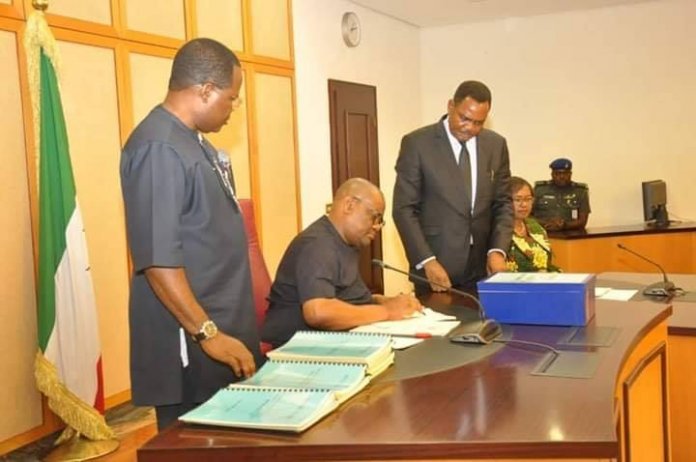 In a bid to strengthen the governance process , Governor Nyesom Ezenwo Wike signed into law three Bills passed by the Rivers State House of Assembly.

According to the report from the the Special Assistant to the Rivers State Governor on Electronic Media Simeon Nwakaudu, the Bills signed into law by Governor Wike are: Rivers State Street Trading, Illegal Markets & Motor (Prohibition) Bill No. 8 of 2019 , Rivers State Healthcare Facilities Registration Bill No. 6 of 2019 and Rivers State Environmental Protection and Management Bill No. 7 of 2019.

Giving his assent to the bills at the Government House Port Harcourt on Friday, Governor Wike said that the State Government is committed to entrenching good governance and the rule of law.

“We have vowed to bring Port Harcourt back to its Garden City status. This law will help us stop illegal street trading, illegal motor parks and illegal markets within the city centre.

“We are not going to allow the littering of the state capital. In the next few weeks, people will see improvements in Port Harcourt “, he said.

The Governor directed the State Attorney General to officially approach the Chief Judge of Rivers State for the appointment of Magistrates for the Mobile Courts.

He said: “We have six mobile courts, so as they arrest offenders, they will be tried and sentenced by the courts. We didn’t start implementation because there was no law”.

Governor Wike said that the State Government has employed workers to fully implement the law.

He noted that the 400 Workers will work in shifts till 8pm everyday to ensure that nobody engages in street trading, illegal markets and illegal motor parks.

He said: “We are spending N6billion to evacuate waste annually. Even at that, people carelessly dump refuse on the road.

“This time, if you generate refuse, you will pay Government to clear it . The Honourable Attorney General to prepare a bill to be sent to the House of Assembly over these environmental issues “, he said.

He said that the three laws are focused on enhancing the living standard of Rivers people. He said what the Rivers State Governor is doing in collaboration with the State Assembly will lift the State Ahead of others.

Earlier, the Majority Leader of the Rivers State House of Assembly , Mr Martins Amaewhule presented the three Bills to Governor Wike for assent.