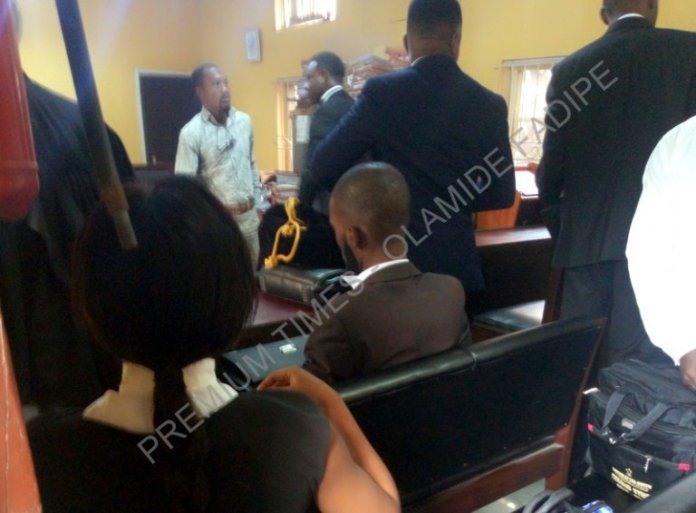 Israel Usman pushed his way through a mass of robed bodies at the door as he struggled to enter the courtroom of the Federal High Court in Lagos, early November. It was a few minutes past 11 a.m. and the registrar had called out, from a file he was clutching, “Suit number FHC/1/311C between The Inspector General of Police and Segun Ode and others.” The case involved the police and 57 youth accused of homosexual activities last year and Mr Usman was representing most of the defendants.

The courtrooms at the Federal High Court in Lagos are, arguably, among the tiniest and most uncomfortable in the country. On every given day, just about two dozen people are seated in the room while the rest – lawyers, plaintiffs, defendants, journalists – are left with little option but to stand around the court’s door. It is not unusual for a lawyer, whose case had been called up, to stand before the judge, breathless, after forcing himself through the crowd at the door.

Sometimes a lawyer has to convince his colleagues that it was his case the registrar just called before he is allowed passage, which was what happened to Mr Usman and his two junior colleagues.

Finally, having gained entrance, Mr Usman, standing at the back of the courtroom, announced that 46 out of his 57 clients were in court and ready for their arraignment.

There was a stunned silence.

And then the judge announced that his court was already bursting at the seams and could not accommodate that many people.

“I only have 36 names before me, there is no way this case can go on in this court,’’ Rilwan Aikawa, the judge, said.

‘’We have to look for a date we can use Court 2 (a conference hall that also serves a courtroom). We cannot have 57 persons in this court.”

The judge then adjourned the case till November 22 for arraignment.

Inside Mr Aikawa’s court, as is in nearly all the courtrooms at the Federal High Court in Lagos, there are six benches, three on either side of the room, and each sits about four people. The benches are expected to accommodate lawyers, complainants, defendants, interested parties, journalists, and members of the public.

On any given day, the benches accommodate Senior Advocates of Nigeria and other lawyers who arrive earlier than 9 a.m. when court proceedings usually begin. The rest are expected to remain standing throughout the day. Also begging for room are piles of case files which spill out of wooden shelves and take up any available space from the dock to the witness stand to the gap underneath the registrar’s desk.

The only exceptions are Court 1 (used by the Chief Judge of the Federal High Court) and Court 2 (the conference hall).

One sunny morning in October, a heated argument ensued among those standing by the door. A male lawyer trying, frantically, to get a foothold at the door met a stiff resistance from his female colleague.

‘’Where do you want me to move to?” The lady asked.

The man retorted, “I don’t care if you have to compress or decompress yourself, I just want to go inside.”

Lawal Ijaodola, a lawyer, said he visits the federal high court in Lagos at least twice weekly for his cases.

He describes the courtrooms as “slightly expanded cubicles.”

“It is no secret that the courtrooms are too small, he said.

Mr Ijaodola said for a lawyer to secure a seat in the courtrooms, he has to be there at least one hour before the door is opened.

“These courts are so small you don’t even need a public address system for the court to hear you because talking in the slightest bedroom voice, you can be heard conveniently.”

For Adam Mohammed, another lawyer who visits the high court regularly, the courts are too small for a busy jurisdiction that witnesses a high volume of cases.

“If there is no light, the courts will be so hot, I was involved in a case and we had to stay there for several hours because there was no light and the court sat by 1 p.m.,” Mr Mohammed said.

“Light, space and other amenities in the court are not so encouraging considering the type of schedule the judges have and the number of litigants before them.”

For Mr Mohammed, the only way of securing a seat in the courtroom is to arrive two hours before the court begins sitting.

“Otherwise, there is no hope you would get a seat,” he added.

Oluseyi Olukoga, another lawyer, said in addition to the tiny courtrooms, basic amenities such as functional toilets and a parking space are visibly absent at the Lagos federal high court.

“Lawyers cannot park within the premises, even outside the premises there is problem of space,” he said.

“We were hoping that with the new annex, most of these problems will be addressed. But if you go to the building, the courts there too are very small and lawyers still have to sit outside.”

“I just realized it’s one of the new SANs that just used his money to refurbish the toilet in the court premises.”

Mr Olukoga described the conditions in the courtroom as “very discouraging.”

“Some have lost their case because of the way things are in court, losing vital documents while haphazardly moving their case files around or trying to go through it while standing in court,” he said.

“In fact, to function in court sometimes, you just have to be tough and determine that you will get it done no matter what and this is very bad.”

Another challenge the court faces is lack of storage for exhibits.

“Ordinarily there should be a facility called exhibit keepers facility like in saner climes so that none of the parties has access to the exhibit or tamper with it but it’s unavailable in Nigerian courts,” said Mr Mohammed.

Mr Olukoga said the Evidence Act is not properly backed by adequate funding or provision of facilities by the government.

“The Evidence Act 2011 made a provision for electronic evidence and you will expect that with the passing of that law, the federal government will follow it up with providing the necessary facilities that will make storing these devices possible but this is not the case” he said.

In Court 2, which is used by Justice Mohammed Liman, cases are sometimes adjourned when the facility is to be used for its original purpose: as a conference hall.

The hall is equipped with public address systems for the judge, the court registrar, counsel, witnesses, and defendants. It is also spacious and air-conditioned.

During a recent court hearing, Mr Liman told a counsel seeking an adjournment for his suit, “Friday, we are having a retirement ceremony for Justice Mojisola Olatoregun so we will not be able to use this court for our proceeding. Since the programme starts by 11 a.m., we will have to conduct our case in one of the courts downstairs.”

Senate and the Copyright Bill

9 Reasons Why CCT Arrest Warrant for CJN Onnoghen is a...