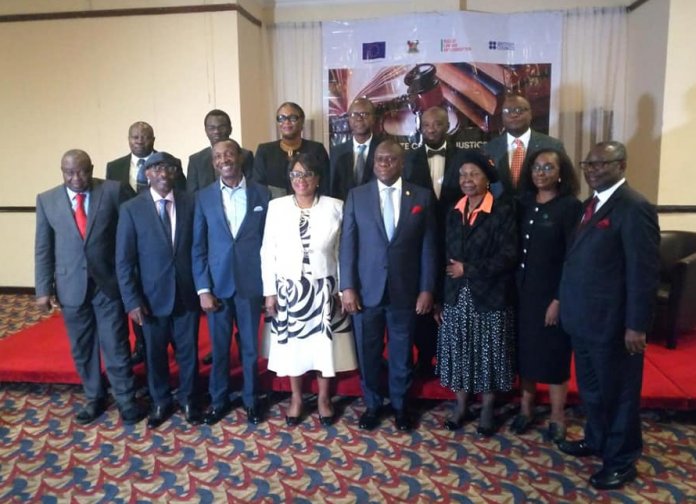 The Chief Judge of Lagos State, Justice Opeyemi Oke, said that the state government was working hard to meet the expectations of the citizens in their quest for justice.

Oke said this on Tuesday in Lagos during a one-day workshop on criminal justice, with the theme: “Appraisal of Current Criminal Justice Regime in Lagos State“.

The workshop was organised by the Rule of Law and Anti-Corruption (RoLAC) Programme funded by the European Union and implemented by the British Council.

According to Oke, regardless of daunting challenge in having successful criminal justice reforms, the state government is working seriously to meet the expectations of the citizens. The state was also ensuring that litigants get the best justice system and experience, the Chief Judge said.

She said that some of the challenges facing criminal justice reforms in Lagos included lack of access to good counsel by indigent citizens, media trial by security agencies, inadequate funding and inadequate trained prosecutors, among others.

The chief judge called on stakeholders in justice sector for support, stressing that reform could only be actualised through inter-agency cooperation and collaboration.

“As far as efficient and effective administration of criminal justice is concerned, this cannot be achieved without collaboration and cooperation of all stakeholders in the sector.

“The importance of criminal justice to the smooth running of any society cannot be overemphasized. Indeed, an effective criminal justice system is regarded by many as germane to the maintenance of law and order,” she said.

The Attorney General and Commissioner for Justice in Lagos State, Mr Adeniji Kazeem, said implementing the reform in criminal justice and maintaining law in a highly populated state like Lagos was not an easy task.

Kazeem said his expectations from the workshop included discussion on new trend and reforms that had worked, not just in other parts of Nigeria but also other jurisdictions.

He said their discussions should particularly looked into options of the traditional judiciary system and efforts at decongesting the prisons.

The commissioner said measures of post-conviction geared at rehabilitating convicts whilst preparing them for integration should likewise be discussed.

A representative of RoLAC, Dr Oluwatoyin Dadejogun, said criminal justice system must be able to respond with a heart, one that flowed with the milk of human kindness. He said it should be able to discern and respond with a reformative objective in mind, stressing that the rule that regulate the system were made by people.

“The system at the end of the day should reflect the premium placed on human life and dignity, safety, security on victim of crime, on offender, and social harmony or cohesion,” he said.

Dadejogun commended Lagos State Judiciary for championing reform in criminal justice administration in the state and Nigeria as a whole.

Participants were drawn from the Ministry of justice, Nigerian Bar Association, police prosecutors, Magistrates and High Courts Judges in Lagos.