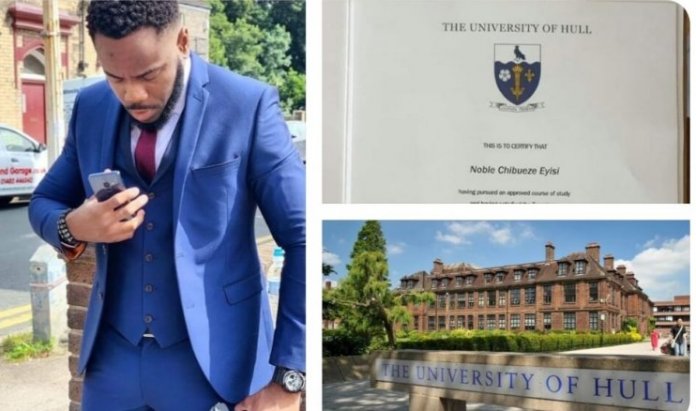 A one time Students Union President of Nnamdi Azikiwe University, Comrade Noble Chibueze Eyisi who was suspended indefinitely by the University Management in 2015 has graduated form the University of Hull, UK with First Class Honours in Law with Politics.

After his suspension, the then Students’ leader who was adjudged the best Union leader in the University laid low until few days ago when the news of his new feat emerged.

Noble Eyisi was reportedly suspended from the University in 2015 after he led a student protest against his impeachment by some members of the executive body of the Student union Government.

Noble Eyisi, while he was the SUG President was believed to be very Pro-Student, thereby making him to champion student welfare initiatives. This didn’t go down well with the School management and some members of the Student Union Executive body.

Some members of the Student Union Executive Body, increasingly uncomfortable with the way things were going, passed a Vote of No Confidence on Mr Noble Eyisi, after bringing a 5-count charge against him.

According to Noble, amidst this crisis, the Vice-Chancellor ordered for his removal. And on the 18th of May 2015,he was impeached.

Prior to  his eventual impeachment, Mr Noble and his friends faced persecution from the school authorities, from the seizure of his official vehicle to the arrest of his friends and threats directed at his person, which strengthened his belief that his impeachment was allegedly instigated by the Vice-Chancellor himself.

Him and the students went on peaceful protest, to register their displeasure towards what they believe was an unconstitutional impeachment. Mr Noble also went to the court to contest his impeachment .

On 11th of June of the same year,  while he was headed for his political science department for lectures , Noble was arrested by a man believed to be the security aide to the Vice Chancellor of the university , bundled into a University security Van and taken to the State Security Headquarters of Anambra State Located at Amawbia, where he was issued his suspension letter by the Director.

Not deterred by his indefinite suspension from the school , Mr Noble Eyisi , applied for and got admission into the University of Hallcity in the UK , where he enrolled to study Law while working with a security Company ; Shield Security Services (Yorkshire ) Ltd.

This year , July 2019 , he graduated with a first class. What a Typical story of making Lemon from Lemonade !

Mr Nobel is a native of Adazi Ani in Anambra State , his mum , Mrs Joy Chinwe Eyisi was the Head Of Department , English Language and Literature, Faculty of Arts Nnamdi Azikiwe University between 2006 and 2011 and currently the Deputy Vice Chancellor , National Open University (NOUN). 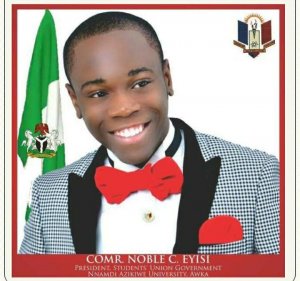 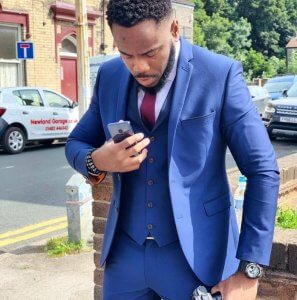 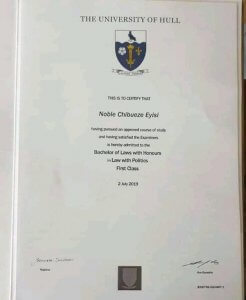 The Proposed Ngo Bill: an Encroachment on the Right of Expression...