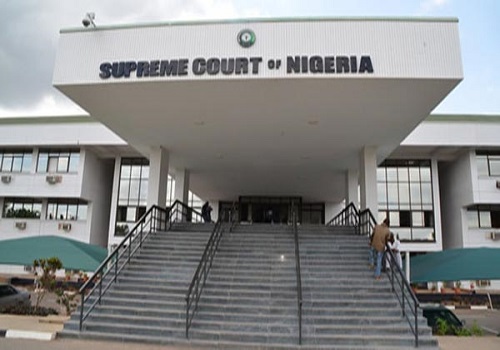 The Supreme Court of Nigeria has affirmed the judgement of a Federal High Court sitting in Lagos, Southwest Nigeria that ordered Stanbic IBTC bank Plc to pay one of its customers, Mr Patrick Akinkuotu and his company Long Term Global Capital Limited the sum of N2.5 billion for breach of contract.

The judgement of the apex court arose from the judgement of a Federal High Court in Lagos, who had earlier awarded the N2.5 billion as damages against the bank.

The case of Akinkuotu and his company against Stanbic IBTC bank Plc as presented by their lawyer, Chief Felix Fagbohungbe SAN was that, the bank granted overdraft facility of N600 million to Long Term Capital Ltd on the 11th of April, 2007.

The bank also granted two additional facilities of N400 million and N250 million to Akinkuotu on the 11th of May, 2007 and 17th of July, 2007 respectively. The facilities were for a term of 365 days with an option of rollover among other terms.

Upon application by Akinkuotu, the facilities granted them were merged and same were secured with shares held by them in various companies. The bank, upon instruction received via e-mail sold 28,745,400 units of GTB PLC shares held by Akinkuotu and his company at the sum of N267,775,799.21.

The Plaintiffs became aggrieved and contended that the proceed of the shares sold by the bank was very low. They also contended that they have liquidated the overdraft facilities granted them by Stanbic IBTC bank Plc, consequently they sued the bank for breach of contract and claimed damages for loss of business opportunity.

Fagbohungbe, SAN on his part, argued that the case of his client was that of gross negligence and unprofessionally selling the shares separately owned by Mr Akinkuotu and his company at significantly lower and unauthorized prices whilst purportedly acting on Mr Akinkuotu’s unsigned e-mail alone between him and the officer of the bank Mr.N.Udoh while ignoring entirely the specific terms of the sale mandate officially issued by his clients

The trial court while entering judgement in their favour awarded them N2.5 billion damages, and said “The law stipulates that court should discountenance an unsigned document as its contents cannot override a duly executed mandate in the circumstances”

Dissatisfied with the judgement of the court, Stanbic IBTC bank Plc appealed the judgement, however, its case was dismissed by the Court of Appeal.

Thereafter, the bank took its case to Supreme Court, the court after appraising the facts and submission of Fagbohungbe appearing with Barrister Abayomi Adeniran as presented on behalf of Akinkuotu and his company and O. Ayanlaja, SAN appearing with Tayo Oyetibo, SAN for Stanbic IBTC Plc, in a judgment delivered by five panel members of judges dismissed the appeal of the bank for lacking in merit and awarded cost of N50,000 in favour of Akinkuotu and his company and against Stanbic IBTC Bank Plc .

Maina Asks Court for Bail Variation; Says Getting a Senator as...