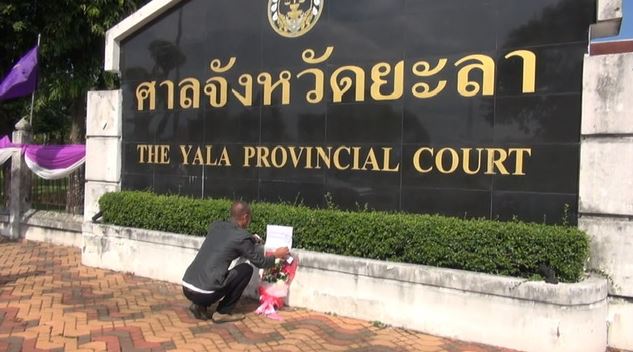 A judge in Thailand’s troubled Deep South was recovering Saturday after shooting himself inside a courtroom right after delivering a defiant verdict in a murder case, in which he railed against alleged interference by his superiors, according to an official who visited him at the hospital.

Judge Kanakorn Pianchana of the Yala Provincial Court, 49, took out a handgun, aimed it at his chest and pulled the trigger in front of a stunned crowd on Friday, a police official and an eyewitness said. The shooting happened almost as soon as Kanakorn acquitted five defendants, who were charged with killing five people at a local poultry farm last year.

“He is safe now,” Anirut Jaithieng, the chief judge at the provincial court, told BenarNews after stopping by the hospital to see Kanakorn on Saturday.

“For any future treatment of him, it will follow protocol,” Anirut said.

A relative of one of the defendants was in the courtroom when the shooting occurred.

“The judge finished the verdict and he turned to pay his respects to the king’s portrait before shooting himself. I ducked,” the relative, who requested anonymity, citing concerns for privacy and safety, told Benar.

“Judge Kanakorn Pianchana was injured from a gunshot wound in his chest and was transferred to Yala Central Hospital. From an initial investigation, he shot himself while delivering a verdict,” said Col. Narawi Binwae-arong, the chief of police in Yala, one of the provinces in the heavily militarized and insurgency-stricken Deep South.

Before entering the courtroom, Kanakorn posted a message on his Facebook page alleging that higher-ranking officials in the court system had pressured him to convict the five defendants. In the post, he said he planned to disseminate the verdict via Facebook Live.

Some scenes from Friday’s court session were broadcast live on the social media platform, according to video clips obtained by BenarNews, but it was not immediately clear whether the shooting was aired on Facebook. Both the post and a recording of the broadcast were later removed from Kanakorn’s Facebook page, but video clips and his post were shared online by other internet users.

“I [will do a] live broadcast to tell people that the director of the office of the chief justice (for Region 9) ordered me to penalize the five defendants without solid evidence to prove that they committed crimes, but I don’t follow him,” Kanakorn wrote in Thai in his post.

The judge alleged that court procedures stipulated that higher-ranking judges could only review his case if it was related to the separatist insurgency. But the case before him did not touch on national security and the defendants were not suspected insurgents, Kanakorn alleged.

A spokesman for the military’s regional command later confirmed that the five defendants were not rebels.

“[I]n order to punish them, there must be solid evidence. … I can’t confirm that the defendants did not do anything wrong – they could have – but the judiciary must be transparent, have integrity to avoid wrongly punishing innocent people,” Kanakorn said according to a video clip from the Facebook broadcast.

He also alleged this was not the first time that his superiors had tried to interfere with his cases.

In Bangkok, a spokesman for the Office of the Courts of Justice addressed the incident in Yala.

“We initially heard that he [Kanakorn] was stressed out about personal matters. The Office will investigate the incident as it has concerns about it,” spokesman Suriyan Hongwilai told reporters.

Sarawut Benjakul, the office’s secretary-general, said it would convene a meeting next week to discuss the matter and how to handle it.

The judge’s apparent suicide attempt lit up social media, adding fuel to questions about the integrity of Thailand’s court system. Some commentators on Twitter and Facebook said the incident raised stark doubts about the independence of the judiciary.

“Kanakorn’s bullet finally exposed the corrupted Thai judiciary system. The Yala court incident is the exposure of many other cases of the past that brought hardship, agony, fears and disgruntlement to the families of the victims and general people,” Abu Hafez Al-Hakim, a spokesman for MARA Patani, a panel representing Deep South rebel groups in peace talks with Bangkok, wrote in a Facebook post Saturday.

However, Col. Pramote Prom-in, spokesman for the regional office of the Internal Security Operations Command (ISOC), the military command, denied that the armed forces had exerted pressure on courts to sway verdicts.

“ISOC has never interfered in justice. The court has its own judgment,” he said.

4 Possible Outcome Of The Amber Heard Vs Johnny Depp Trial