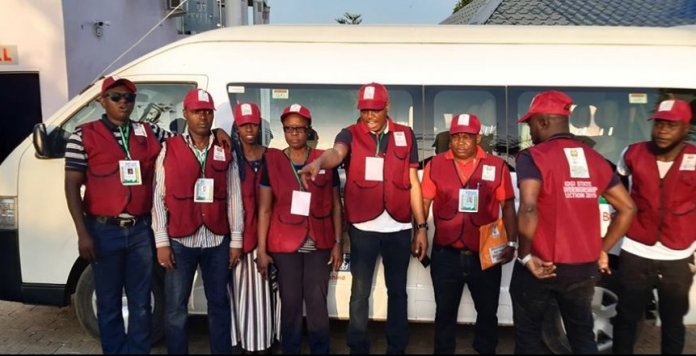 The Nigerian Bar Association (NBA) has submitted its report on the governorship elections conducted by the Independent National Electoral Commission (INEC) in Bayelsa and Kogi States held last Saturday where-in it laments the electoral violence in the two states.

In the NBA reports signed by Mazi Afam Osigwe, the Chairman, NBA Election Working Group, the association said, “There were several reports of electoral violence across Bayelsa and Kogi States. Thugs and hoodlums invaded voting centres to snatch polling materials, harass, molest and intimidate voters and in some cases, INEC officials.

“The voting process was interfered with as cases of voter intimidation were seen. Armed men in Police uniform carted away ballot boxes across polling units in Lokoja.

“In Fangbe, Bayelsa State, a young man was beaten to the state of unconsciousness by unknown young men. At Eribo Square in Yenogoa, Bayelsa State, a member of the National Youth Service Corps was said to have gone missing after armed thugs attacked the place.

“In Angiama community of Southern Ijaw LGA, thugs disrupted the electoral process by intercepting and carting away the voting materials meant for the community, while in Ologi Ward 03 of Ogbia LGA, Bayelsa State, INEC cancelled voting exercise due to the spate of electoral violence and detention of an electoral official.

“In Maigumeri Army Barracks, Lokoja, a public announcement was made for voters to either vote for a particular candidate or leave the polling centre, failing which they would face dire consequences. There was open intimidation of voters at the polling unit.

ALSO READ   NBA Lagos 2018 Law Week: Find out what is Happening where

“They dispersed the voters and other officials thereby leading to a pre-mature closure of the process. One person was confirmed dead at this polling unit,” the report stated.

The NBA, while commending the electoral umpire for recruiting 81 persons with disabilities as ad hoc staff for the Kogi State gubernatorial election, also added that, 10, 063 ad-hoc personnel made up of collation and returning officers were trained to conduct elections in Bayelsa State, with no fewer than 16,139 ad hoc staff recruited to conduct a seamless election process in Kogi.

The association observed that election did not commence at the scheduled time,  8 am in most of the polling stations in both States, due to the late arrival of INEC officials and materials.

It said there were no complaints of shortage of voting materials in both states except lack of tables in various polling centres.

The report said the performance of the smart card readers although not wholly unsatisfactory, raised concerns and provided sufficient basis for anxiety among the electorate.

“In some polling units, the smart card readers malfunctioned. A peculiar example was in Crowther Memorial College, Lokoja, Kogi State where verification was carried out but there was no authentication of fingerprint. The card readers were fluctuating or had stopped functioning as at the time our observers visited polling units located in Kabwei market square, Polling unit 14, ward 10, Amassoma, Southern Ijaw LGA; Polling Unit 8, Ward 1, Polling Unit 10, Ward 1 Okaka Primary School; Polling Unit 16 Ward 1, Yenagoa LGA, all in Bayelsa State.”

In contravention of INEC Regulations and Guidelines, INEC officials were not seen directing voters to indicate phone numbers and thumbprints on the registers of voters before allowing them to vote in instances of voters whose fingerprints were not authenticated by the card reader, adding that, officers resorted to manual accreditation of voters to enable registered voters cast their votes.

ALSO READ   Quest for Deep Knowledge of the Law Should be the Pre-occupation of Young Lawyers - Prof. I.O. Smith SAN

The NBA, therefore, called on governments and law enforcement agencies to develop political will and muscle to bring to book all persons and parties involved in any form of electoral offences as was recorded during the elections.

It recommended that security personnel, at national and state levels must always exhibit neutrality and professionalism in carrying out their election-related assignments in order to engender a peaceful environment for the smooth conduct of elections.

“INEC must put in place measures that guarantee free and unhindered access to the polling units for every citizen. We must devise a way of not making our elections do-or-die affairs. There must be a way of letting politicians know that winning elections must not be at the cost or expense of human lives,” it said.

The “Young Lawyers’ Forum” and Its “Dangerous” Political Alignment