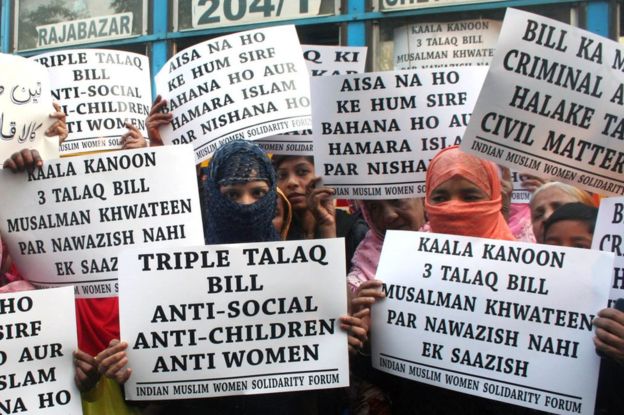 India’s parliament has approved a bill that makes the Muslim practice of “instant divorce” a criminal offence.

“Triple talaq”, as it’s known, allows a husband to divorce his wife by repeating the word “talaq” (divorce) three times in any form, including email or text message.

The Supreme Court declared the practice unconstitutional in 2017.

Men found in breach of the new law can be jailed for up to three years.

The bill was first tabled in 2017 but stalled in the upper house of parliament, where some MPs called it unfair.

But the BJP doesn’t have a majority in the upper house. On Tuesday, the bill was passed by 99 votes to 84 after a number of walkouts and abstentions.

Prime Minister Narendra Modi was quick to celebrate the vote as “a victory of gender justice”.

An archaic and medieval practice has finally been confined to the dustbin of history!

Parliament abolishes Triple Talaq and corrects a historical wrong done to Muslim women. This is a victory of gender justice and will further equality in society.

But others accused his Hindu nationalist BJP of targeting Muslims.

Asaduddin Owaisi, an MP from the opposition All India Majlis-e-Ittehadul Muslimeen party, said the new law was another attack on Muslim identity under the BJP, which has been in power since 2014.

This law is against Muslim women & marginalizes them even more. The law forces a woman to stay in a marriage with an imprisoned man who'd verbally & emotionally abused her. It puts the burden of proof on Muslim women & forces her into impoverishment

What is instant divorce?

There have been cases in which Muslim men in India have divorced their wives by issuing the so-called triple talaq by letter, telephone and, increasingly, by text message, WhatsApp and Skype. A number of these cases made their way to the courts as women contested the custom.

Triple talaq divorce has no mention in Sharia Islamic law or the Koran, even though the practice has existed for decades.

Islamic scholars say the Koran clearly spells out how to issue a divorce – it has to be spread over three months, allowing a couple time for reflection and reconciliation.

Most Islamic countries, including Egypt, the United Arab Emirates, Pakistan and Bangladesh, have banned triple talaq, but the custom continued in India, which does not have a uniform set of laws on marriage and divorce that apply to every citizen.

Why is the bill so controversial?

Campaigners and political parties are sharply divided over the bill. Those against it, including some Muslim women, point out that it’s unusual to criminalise divorce.

The Congress party and others have pointed out the practice was already outlawed by the country’s top court. Others have said the state has no place in regulating the marital home.

But those in favour of the bill say triple talaq is deeply discriminatory towards women.

Law Minister Ravi Shankar Prasad defended the bill, saying the practice had not stopped despite it being banned. He told the Rajya Sabha that some 574 cases were reported after the Supreme Court verdict.

“The judgement has come, but no action on triple talaq has been taken. That is why we have brought this law, because the law is a deterrence,” he said.

Campaigners say it’s almost impossible to quantify how many cases of triple talaq occur in India.