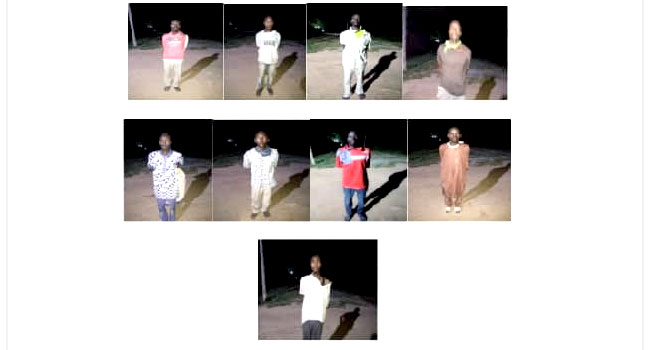 The Nigerian Army has captured 10 suspected key Boko Haram members, one of which includes, Alhaji Bukar Modu, a high profile leader who is on the wanted list published by its authorities.

In a statement by the Operations Media Coordinator, Colonel Aminu Iliyasu, the suspects were apprehended while attempting to sneak into some communities around Bitta in Gwoza LGA of Borno State in a bid to escape.

He added that most of the suspects are known to have operated combat vehicles during the attack in Gwoza in 2014.

“For instance, during a successful sting operation conducted on 9 October 2019 by troops of the 26Task Force Brigade, 10 suspected key Boko Haram members were reportedly captured while attempting to sneak into some communities around Bitta in Gwoza LGA of Borno State in a bid to escape the troops’ sustained onslaught against them.

“Preliminary investigation reveals that the arrested criminals are ranked higher than the Amir in the criminals’ hierarchy. Many of them have been identified to have operated combat vehicles during the infamous Boko Haram attack on Gwoza in 2014. The arrested suspects include Shettima Mustapha Umar, Abba Buji, Alhaji Bukar Madu-(KAHID – a Boko Haram Terrorists’ equivalent of a Brigadier General), Ali Hassan (Boko Haram Terrorist Imam), Alkali Laminu, Bukur Mustapha, Buba Umaru (Alias Black Uhuru) also a KAHID, Madu Nosobe, Mustapha Hussaine and Umar Jeddum all from Bama LGA of Borno State.

“It is gratifying to note that one of the arrested suspects, Alhaji Bukar Modu is Serial 89 on the high profile Boko Haram leaders wanted list published by the authorities of the Nigerian Army,” the statement added.

ALSO READ   Candidate Who Demanded N1b from JAMB for 'Changing' His Result Handed Over to Police for Alleged Manipulation, Forgery.

The statement also revealed that troops of 1 Division Garrison Tactical Headquarters responded to a reported cattle rustling incident in a community in Birnin Gwari LGA of Kaduna State.

It added that the bandits abandoned the 23 rustled cows and fled into the forest.

The capture is coming after the Theatre Commander of the Army’s Operation Lafiya Dole, Major General Olusegun Adeniyi, said that if military helicopters are provided, the Boko Haram insurgency would be over in the next three months.

He stated this when a National Assembly Joint Committee on the Army operations paid a visit to the theatre in Borno recently.