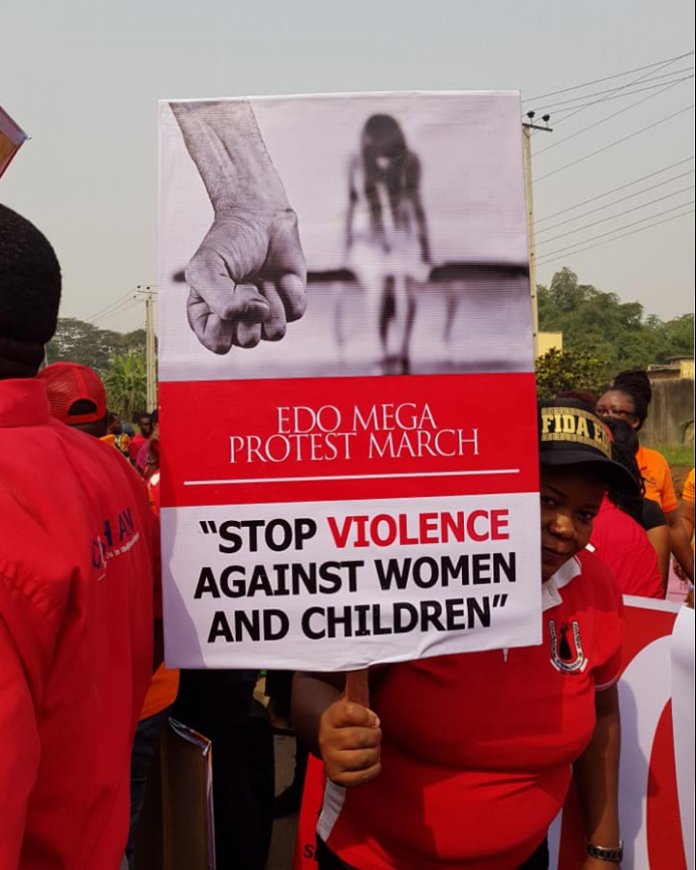 Wife of the Edo State Governor, Mrs. Betsy Obaseki, has charged the Police in the state to ensure strict enforcement of the Violence Against Persons (VAP) Law.

Mrs. Betsy gave the charge during a march to protest acts of violence against persons in the state, which coincided with the signing of the VAP Law by the Edo State Governor, Mr. Godwin Obaseki.

The protest was also held against the inhuman treatment meted to a young girl, Miss Ada Favour, over allegations that she stole a mobile phone.

Also, the Edo State Attorney General and Commissioner for Justice, Prof. Yinka Omorogbe, urged the police to ensure that they properly prosecute cases of crimes against persons, even when they go against the grain of societal acceptance, noting that justice must be served in all cases.

Mrs. Obaseki said the state governor is gender-friendly and would work to advance the interest of women, adding, “We have a gender-friendly governor, and for these things to be happening in his time, it shows that they are about to end. We have to know that we have a governor who loves to promote women issues.”

She urged the Police to ensure a thorough investigation of the assault on Miss Ada Favour and ensure that justice is served on the matter.

On the abuse of the young girl, she said, “So, we want to condemn from the debt of our hearts and with every iota of our being, violence, indecent and inhuman acts, especially against women and children. We as women in Edo State, join our voices with the International Federation of Women Lawyers (FIDA), a Non-Government Organisations (NGO), and other stakeholders to condemn the act.

Speaking on the need to be thorough in investigations, Prof. Omorogbe told the police commissioner, “We know that you are a partner with us. We welcome that and value the relationship. But what we want is to ensure, particularly in the justice sector, that justice is truly served.

We want you to ensure the right investigation. “We don’t want our cases botched. Very often, when we are dealing with gender violence or violence that is treated as being the norm in society, the Police often mess it up because they don’t even see that it is a problem in society.”

Governor Obaseki, last Tuesday signed the Violence Against Persons (VAP) Bill into law, to address all forms of violence and protect vulnerable members of the society.

Signing the bill in Government House, Benin City, he noted that he was aware that the bill touches on fundamental practices among the people, assuring that he was not only signing the bill as a formality, but will ensure it is implemented to the letter.

“We will not stop here by just signing the bill into law, but will commence the much difficult work of implementing it to the letter. It must be noted that this bill has been in consideration for over six to eight years but the time has come for us to have a law like this VAP Law, to protect the most vulnerable and weak in our society.

“As a government, we have aligned with the Federation of Women Lawyer (FIDA)’s purpose and objective and therefore have no hesitation in signing the bill into law,” he said.

I Celebrate the Joy of Being the Founder of FIDA Gombe...