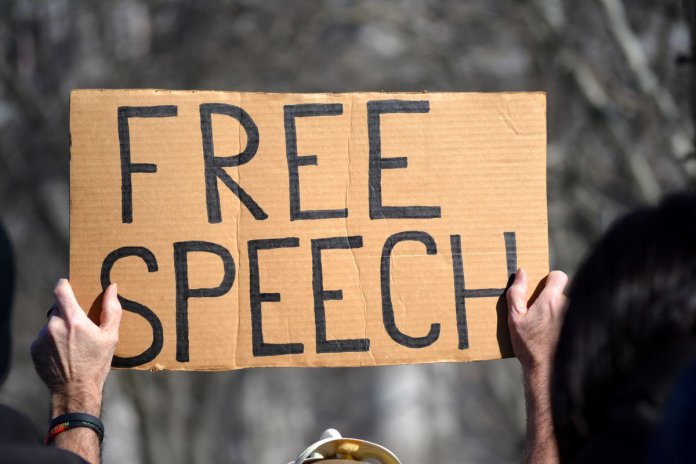 On Nov. 10, 1919, in his famous dissent from the Supreme Court decision in Abrams v. United States, Justice Oliver Wendell Holmes argued for “a free trade in ideas”—even dangerous ideas that we “loathe and believe to be fraught with death.” At the time, the First Amendment was an empty promise. There had always been censorship in America: Federalists had thrown newspaper editors in jail. Abolitionists were attacked in the streets. Men and women who fought for sexual equality were prosecuted for obscenity.

Today Holmes can sound antique. If there wasn’t enough free speech in 1919, we seem to be drowning in it today—and many of the loudest speakers preach hate.

In his dissent, Holmes scoffed at the idea that Jacob Abrams had posed a serious threat to the military when he distributed leaflets calling for a general strike in the waning days of WWI. But the internet has given white supremacists a powerful tool for finding each other and coordinating collective action; harassing and intimidating immigrants, Muslims, and people of color; and inspiring each other to violent action.

To Holmes, free speech was necessary because the best test of truth is the power of thought to get itself accepted in the competition of the market. But do we really need to debate the truth of racism? Doesn’t giving racists a platform legitimize a fully discredited idea? After all, most Western democracies ban hate speech.

Holmes was not insensitive to the dangers of hateful speech and extremism. Radicalism was on the rise in 1919: Communists had launched a revolution in Russia; anarchists were mailing bombs to prominent Americans, including Holmes; and only months earlier, he had written the decision that upheld a 10-year jail sentence for Socialist Party leader Eugene Debs for violating the Espionage Act. But Holmes changed his mind. He realized that in a democracy the people, not the government, must decide which ideas have value. Since this requires debate, it followed that speakers must be free to say almost anything.

In Holmes’s Abrams opinion, he distilled his argument in a single sentence: “If there is any principle of the Constitution that more imperatively calls for attachment than any other, it is the principle of free thought—not free thought for those who agree with us, but freedom for the thought that we hate.”

Over the last century, American courts have embraced Holmes’s view. They have protected a lot of hateful speech, but they have also made possible the expression of many ideas that once outraged the majority but ultimately won its endorsement, such as women’s suffrage, laborers’ right to form unions, and opposition to the war in Vietnam.

Most Americans were hostile or indifferent to civil rights when the Montgomery bus boycott began in 1955. But the bravery of Rosa Parks and the black citizens who refused to ride in the back of the bus spoke loudly to white America. As the protests grew, newspapers and television revealed horrific images—of protesters beaten as they attempted peaceful marches, dragged from segregated lunch counters, and attacked with fire hoses and police dogs.

This was speech that changed the nation. But the fight is not over. The death of Michael Brown in a shooting by police in Ferguson, Mo., launched a new age of protest over systemic racism. Once again, protesters are facing a backlash: Black Lives Matter has been condemned for spreading hate speech against the police, and NFL players who choose to kneel in protest during the national anthem now face disciplinary action from the league.

Holmes knew what he was doing 100 years ago. The only way to respond to people with hateful ideas is to let them speak and then challenge what they say. It is human nature to want to suppress speech that hurts people—but the last century has shown that free speech is essential to the growth of democracy.

ALSO READ   The Cleansing of the Judiciary

Christopher Finan is executive director of the National Coalition Against Censorship, an alliance of 57 national nonprofits that defends freedom of thought, inquiry, and expression. He is the author of From the Palmer Raids to the Patriot Act: A History of the Fight for Free Speech in America (Beacon).

Is Judiciary Ready for 2019 Polls?

The Impact of Intellectual Property Laws on Foreign Direct Investment in...