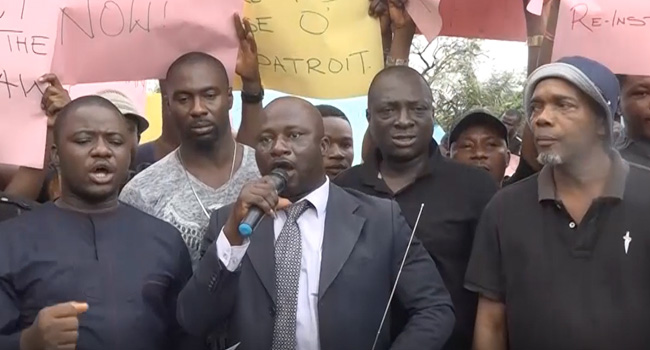 Youths in Enugu and Cross River State are protesting the suspension of the Chief Justice of Nigeria (CJN), Walter Onnoghen.

The protest in Calabar the state capital was led by Mr Portrait Peterson, described the development as an assault on the sacred temple of Justice.

In their numbers, the youths converged at the eleven-eleven roundabout in the state capital to express their displeasure over the attempt by the executive to ‘belittle’ an arm of government.

They called for the immediate reinstatement of the CJN with all his rights and privileges as the Chief Justice of Nigeria, adding that the rule of law must abide to restore the nation’s lost integrity.

The group further tasked Nigerians of voting age, to ensure they get their PVC’s handy to vote for credible leaders in the forthcoming general elections.

Also in Enugu, a group under the aegis of Coalition of South East Voters Voice has taken the streets to protest the suspension of the CJN describing it as a midnight order of the court.

The group is arguing that the order cannot stand in the face of section 292(1) of the 1999 constitution which delineated the removal, suspension or exerting of any other disciplinary action against a judicial officer.

According to the group leader, they are not against the fight against corruption but that due process of the law is followed in exerting disciplinary action against the CJN as the actions of the president is capable of impeachment.

Extension of Time for Payment of BPF – To Be or...