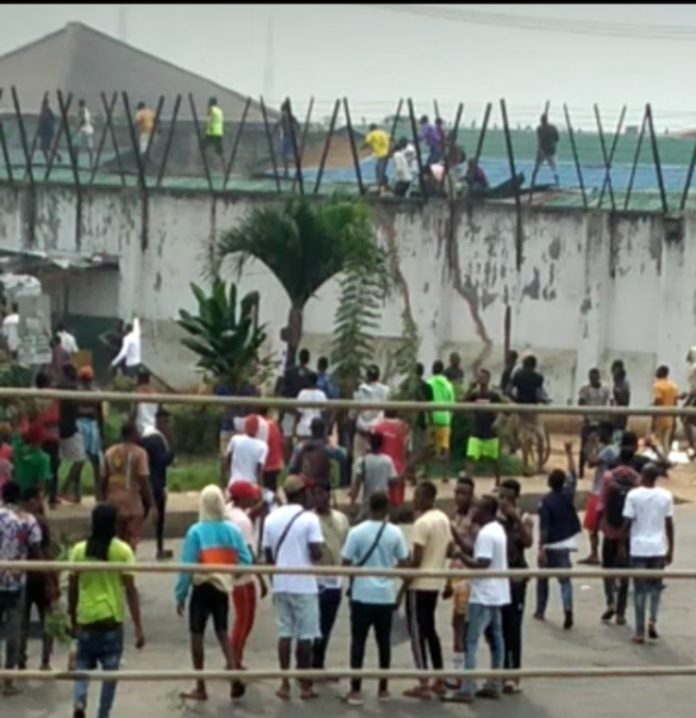 The federal government yesterday put the total number of inmates that were illegally released on Monday when hoodlums attacked two correctional facilities in Edo State at 1,993.

The hoodlums, who had taken advantage of the ongoing nationwide #EndSARS campaign against alleged police brutality had breached the security of the correctional facilities in Benin City and Oko, leading to the escape of the inmates.

Giving an update on the attacks, the federal government, in a statement yesterday by the Director of Press and Public Relations at the Ministry of Interior, Mr. Mohammed Manga, said the attackers, armed with weapons, attacked the officers on guard duty and proceeded to release the inmates.

It said the situation has been brought under control while security in and around the custodial centres nationwide has been beefed up.

The statement added that an investigation has commenced to determine the impact of the attack.

“Two Nigerian Correctional Service (NCoS) Custodial Centres in Benin City and Oko in Edo State were attacked yesterday by protesters purportedly under the #ENDSARS aegis, freeing (at the last count) 1,993 inmates in legal custody and looting the centres, including the weapons in their armoury,” it stated.

It added that the integrity of the custodial centres is, therefore, fundamental to justice, stressing that the inmates of the centres are expected to pay their dues to society, undergo reformation and be reintegrated into society as changed-for-better persons.

The federal government stated that when this process is disrupted in any way, the integrity of justice and societal renewal is subverted, with dire and unimaginable consequences.

“Most of the inmates held at the centres are convicted criminals serving terms for various criminal offences, awaiting execution or standing trial for violent crimes. Their being let loose gravely imperils lives and property. It is an unacceptable and intolerable threat to national and communal security,” it said, adding: “Government’s primary duty is to protect lives and property and keep the people safe. We shall not be shirking in our responsibility and we shall not disappoint the people.”

The government stated further: “We urge the #ENDSARS protesters to remain peaceful, embrace dialogue, screen their rank and file and flush out those with criminal intents and, more importantly, steer clear of the custodial centres.”

It assured Nigerians, especially Edo State residents, that the correctional centre in conjunction with other security agencies had commenced the tracking and apprehension of all the escaped inmates before they do any harm.

“Anyone who notices any person or persons that might have escaped from the custodial centres should, as a patriotic duty, inform the nearest security agency,” it said.