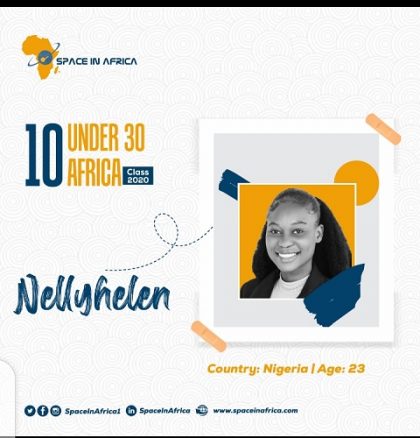 23 years old Nelly Helen Ebruka, has been named one of Africa’s top 10 under 30 in the Africa space industry.

The nominees who are young Space innovators, engineers, entrepreneurs, teachers and enthusiasts were selected from over 100 entries and 31 unique nominations from 13 African countries through a meticulous vetting process and grading by a team of five distinguished Judges drawn from five African countries. The Judges are respected professionals across private and public institutions, with vast experience and understanding of the African space industry.

Nelly also served as the founding chairperson of the University’s space law club and organised local space law moots for students amongst other fields of international law. She was the Team Leader for the university of Calabar representatives at the 8th Regional rounds of the Manfred Lachs Space law Competition, held in Pretoria. The team won the competition with Nelly meriting the award of best orator for the rounds.They further represented Africa at the global finals of the competition and ended as first runner-up of the competition.

In 2020, she coached the University of Calabar team to emerge as runners up for the 9th regional rounds of the competition that was judged solely by written submissions. Her passion for space inspired her to co-found the Learnspace foundation, a non-governmental organization dedicated to promoting space education and awareness in Nigeria and Africa at large. Nelly attended and presented a paper at the last African Space leadership conference that was held in December last year in Addis Ababa, Ethiopia as a Scholarship Awardee of the African Union and was a member of the African space youth Forum for the conference.

Currently, she is a member of the Spacehub Team, an organisation that is building the African space ecosystem and provides a platform for Africans to get involved in space. Always willing to learn more and collaborate,she is a mentee under the UN space for Women mentorship program and also an enthusiastic volunteer of the space generation advisory council.

Legal Implication of Covid 19 on Statute of Limitation – Chidera...

The Position Of The Law Regarding Abortion In Nigeria