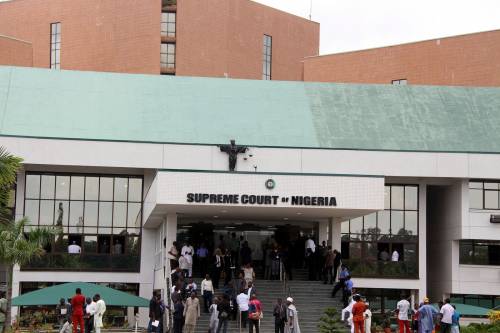 Judiciary watchdog, Access to Justice, says it has reasons to believe that the President, Major General Muhamadu Buhari (retd.), is ethnically manipulating the appointment of Supreme Court justices.

The group, in a statement on Thursday, pointed out that while it took Buhari about 11 months to send to the Senate for confirmation the first list of justices recommended to him by the National Judicial Council, the second list sent by the NJC took him only two weeks to send to the upper legislative chamber.

A Justice noted that the first list had Justices Adamu Jauro, Emmanuel Agim, Samuel Oseji and Helen Ogunwumiju; while the second list had the names of Justices Lawal Garba, Addu Aboki, I. M. Saulawa and Tijjani Abubakar.

“The Presidency has offered no explanations whatever for what is a huge and remarkable contrast in the pace with which it acted on the recommendations of the NJC with respect to both sets of nominations,” A Justice said in its statement, titled, ‘Appointment of Justices of the Supreme Court: Buhari’s antics sets alarm off on the future of the Nigerian judiciary’.

In the statement signed by its Convener, Joseph Otteh, and Project Director, ‘Deji Ajare, A Justice said it observed that Buhari waited for the second list before he sent the first, and noted in his letter to the Senate that the confirmation would be “according to their ranking of seniority at the Court of Appeal.”

A Justice said Buhari’s “antics speak also to blackmail; the President tells the Judiciary that if his favoured names are not submitted for appointment, no other persons recommended to him by the NJC will be appointed into the Supreme Court. And the judiciary apparently got the message!”

The group said, “The impression all of this creates is that the President was set on manipulating how the Supreme Court is configured, politically and ethnically, now and for the near future; he wanted to determine how seniority amongst the justices of the Supreme Court is ordered as well as which justices of the court can be expected to succeed to the highest judicial office as Chief Justice of Nigeria.

“The President’s letter to the Senate makes specific mention of the confirmation being ‘according to their ranking of seniority at the Court of Appeal’.

“The conduct of the entire process leads to the conclusion that the Presidency had withheld from seeking the confirmation of, and making the appointments of the four justices, whose names were on the first set of recommendations from the NJC, simply because it was targeting the inclusion of further names for appointment to the Supreme Court – names that were not included in the first list.

“Furthermore, that the President was willing to wait out the occurrence of that event as well as ensure that its targets did not lose their comparable rankings with earlier nominated persons notwithstanding that the Supreme Court was almost collapsing with overbearing workloads due to its lean workforce.

“The President has also created unpalatable public suspicion about his motives for delaying the Supreme Court appointments, and, in fact, some sections of the public have alleged there is a quid pro quo motive involved in it.

“The Presidency’s interference with appointments into the Supreme Court further undermines the integrity and independence of the court, and politicises membership of a court that ought to be a neutral, impartial, non-partisan and non-political institution.”