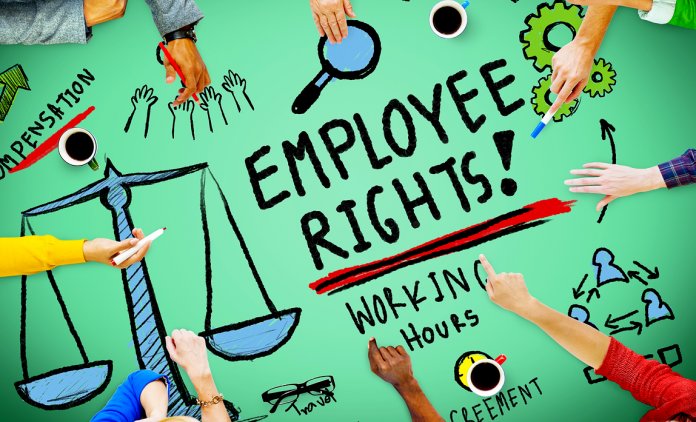 As we prepare to resume work following the government’s decision to ease the lockdown in some parts of the country, there are pertinent questions on the lips and minds of many. Top of the pile are various corporate organisations and businesses who would definitely spend the next few weeks adjusting to the financial impact and realities of the Covid-19 pandemic.

However, one would usually notice that a key stakeholder of the workplace is usually left behind in these plans and strategy sessions. They are the ones to face the brunt of whatever decisions and policies that would be reached or adopted. The stakeholder that is usually missing at the table, are the employees. Most of them have to sign whatever terms of contracts are given to them in order to earn a living. A number of them have unfair work conditions that are sad stories for the ears. In reality, the huge profit made by their employers do not impact on them, as there is no guarantee of a pay rise or any other benefit, but they are the first in line when thinking of how to cut cost due to an economic downturn. All manner of policies would be adopted under the guise of helping the business to recover, but the truth is that many of these employees may never get a raise for a long time. More so, a number of employees may see their status reviewed and due to a lack of alternative, consent to same. Regardless of the circumstance, whatever terms form the basis of the contract between both parties, they are bound by and must comply with it.

I read through an article that was published by Templars; a leading law firm in Nigeria, and I am compelled to state my position, as I fear for how the corporate world and businesses would react to and exploit the position stated in that article. The article titled; COVID-19: Nigerian Labour & Employment FAQS, (Read here) makes some assertions that may lead to an unfair imbalance and an unprecedented onslaught of employees by some employers. I am particularly concerned by the answers given to two questions in the article under reference, and I will go on to discuss them.

The two questions addressed in the article are reproduced as follows;

The answers provided to both questions in the article, are quite similar. However, they do not state clearly what the position of the law is. Rather, the answers were indifferent, then reached a conclusion by arrogating powers that do not exist to employers. The article for instance answered both questions in the affirmative before going on to state that the process may vary from case to case depending on the nature of the employment relationship. In law, we cannot approbate and reprobate at the same time[1]. Would it not be better to state position of law, rather than to answer in the affirmative and then deny same in one breathe.

The article further mentioned that in unionized employments, the buy-in of the employees’ union is very important. This line of thought also negates the initial affirmation that an employer can unilaterally vary the employment contract with its employees. The article also stated that for employees under the labour act, the agreement of the employees is not required to vary the contract, and also stated that the Act requires the employer to inform the worker of the nature of the change by a written statement.

The article further stated that the employees not covered by the Labour Act or a collective agreement are strictly governed by their contracts of employment. Again, the article still mentioned that generally, the employer is at liberty to vary the contract without recourse to the employee where: (a) the contract contains a variation or flexibility clause; and (b) the right may be implied if the circumstances of the business demands, provided that the employer acts fairly, reasonably, in utmost good faith and the changes do not leave the employee in a position where he is unable to perform the contract. The answer ended by stating that either way, best practices require the employer to notify the employee of the new changes after they have been made and explain the basis for the changes”.

The answer to the second question largely follows this pattern. My concerns with the position canvassed in the article is that, while it is a good call to employers, it does not in the end set the pace for justice or a progressive move for the law in a country like Nigeria where our labour laws and enforcement policies are weak.

My understanding of employment law clearly points to the fact that employment contracts are governed also by the general principles of contract[2], and one of such principles is that a contract is an agreement between two or more parties. To this effect, the principle of consensus ad idem is an important factor[3]. This means that for a contract to be valid, parties must be in agreement as to the same thing, such that at all material times, the terms of the contract between both parties are certain.

If the principles stated above are true, how then can an employer have a unilateral right to vary the terms of a contract? It would appear to me that this would only be possible, if what was in place was a decree from the employer to the employee. The fact that the article under review made reference to the need to carry the unions along and notify some class of employees of the variation, makes the argument of unilateral power to vary the terms of employment otiose. The moment a notification is given, the unilateral power to vary the terms of the contract, loses its essence. The moment a notification is given, there are further options to it[4] ;

This whole process clearly shows that the employer does not have the right to unilaterally vary terms of employment as stated in the article, except it is clearly stated in the contract of employment. Hence the position that by international best practices, the employer can only notify the employee of the new changes and the reasons after the variation of the terms of contract has been done, offends the very principle of contract itself[5]. At all times, a contract is an agreement between two or more parties, and international best practices recognises this[6].

The position of the law with respect to the unilateral right of the employer to vary terms of employment was considered in the case of Adebusola Adedayo Omole v. Mainstreet Bank Microfinance Bank Ltd[7]. The judge frowned at the actions of the employer and noted that most employers in Nigeria were beginning to assume the position of tin gods. This position is apt, as it perfectly places the danger we face as a country if we allow employers believe that they have unfettered power to vary the terms of employees’ contracts without any restriction.

The law is clear that only the contents of a contract will be given life by the courts[8] , and that courts cannot rewrite contracts for the parties[9]. Once parties enter into a contract, neither of the parties can claim superiority to or inequality of the other party to the agreement[10]. This is not to forget that we have the rules of equity to lead us through these kind of issues.

Conclusively, in an attempt to state our position, the correct position of law should not be relegated to the back seat. I look forward to see how these issues will unfold in the coming days.

Damilola Mumuni is a Legal Practitioner based in Lagos, Nigeria, focused on solving legal issues with ease. 08082019892; mumunidamilola@gmail.com

[5] In the case of Hart V. St. Mary’s School (Colchester) Limited, the Employment Appeal Tribunal found that the school was not entitled to unilaterally vary Mrs. Hart’s employment contract

Interrogating the Possibility of Artificial Intelligence and Advanced Robotics Taking Over...