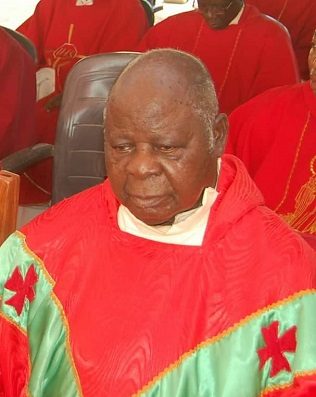 I still remain shocked to the marrow getting the sad news of the death of my elder brother in the priesthood and my principal in the law office of the Archdiocese, Rt Rev Msgr N. C. Obiagba.

This priest was one of the human archives consulted on the general and real property history in then local church which comprised of the present Onitsha Archdiocese, and Awka, Nnewi and Ekwulobia dioceses.

A native of Achina, ordained a Catholic priest in 1965 and called to the Nigerian Bar in 1973, Msgr. combined his priestly vocation with his legal profession for the service of the Church and Society. He was a teacher and formator in All Hallows Seminary Onitsha for decades.

He was a parish priest for relatively few years precisely at the old Iba Pope, Awada. He was sent to University of Nigeria to read English Language but changed to law after some semesters on the advice of Msgr. Stephen Nweke Ezeanya, a lecturer at the UNN (as he then was).

He was later called to the Nigerian Bar amidst controversy. He told few of us the story of what happened on the day of his call to bar. When it was time for his turn, at hearing his name as ‘Rev Fr. Nathaniel Okpala (the family later changed her surname to Obiagba), many members of Body of Benchers whose duty it was to call qualified candidates to the Bar objected to his call because he was a Rev Fr.

Their argument was that in common law, combining priesthood and law in one person was forbidden by the law. Luckily, this view was not shared by the Chairman of the Body of Benchers, Hon Justice Ekundayo who posed 2 major questions to his colleagues. First, he asked them, since his admission to study for Bar Part II, was he not answering Rev Fr? The answer was in the affirmative.

The Second question was, Is there any Nigerian post independence law prohibiting any priest from being called to the bar? The answer was in the negative. Justice Ekundayo then ruled that the only thing that would lead to not calling Obiagba to the bar would be while on calling his name, he would be seen on priestly regalia instead of on lawyers attire.

The Call to Bar ceremony that was suspended thereof resumed. Obiagba was called as he appeared in law attire and not in cassock. This actually set a precedent for the calling of subsequent priest candidates to the Nigerian Bar. With this Obiagba became the 1st Catholic Priest in the Anglophone West Africa to be called to the bar. After his call as before his call, he continued to be of legal service to the Church.

When he was sent to do masters in laws (LLM) at the University of West Virginia in USA, just at reading few of his term and seminar papers, his moderators/supervisors advised that he proceed to do JSD (doctorate) at once. He obtained permission from the authorities and proceeded with JSD which dissertation he defended in 1982 with the title, Ideological Foundations of the 1979 Presidential Constitution of Nigeria.

Msgr on celebrating his golden jubilee priestly anniversary and 80th birthyear, requested that this dissertation be revised and updated to the tune of current law to mark these celebrations. I, Ikenga Oraegbunam with Prof Emmanuel Obidimma and Dr Maurice Izunwa all of the Faculty of Law, Nnamdi Azikiwe University took up the task of revising and updating the work. The task was enormous for a lot law and jurisprudence had changed and developed. New interpretations had emerged resulting to new case law. Meanwhile, updating means up to the 1999 constitution.

In record time, we did the work and gave it the title, Ideological Bases of the Nigerian Presidential Constitutions. Msgr was happy. Most of the church land agreements before we came on board were prepared by Nathaniel Obiagba. Most of the land negotiations and dialogues at events of disputes were led by him. He so much knew the history of lands in the Archdiocese that at a time, some of us advised that he put down these pieces of info in a book or we the younger lawyers act as recorders of the history as he would dictate.

This never came to be. Luckily, having been in the Land Committee of the Archdiocese, most of us have learnt the histories and stories as he told them in meetings. Msgr. Obiagba was a valuable or shall I say an invaluable member of the Constituent Assembly that produced the 1979 constitution. He was later appointed Ombudsman, a Federal Commissioner on Public Complaints covering old Anambra, Benue and Imo states.

He discharged these duties creditably. Msgr. was a very dogged priest and lawyer. He continued to work as such until his death. He was always at meetings and functions and burials and occasions in the Archdiocese and beyond even when one would think he would retire as there are now many younger priests and lawyers. His brain continued to be sharp even at the point of death.

His reasoning was still sound as I was with him the last but one Friday at the Borromeo International and Specialist Hospital Onitsha where I visited and prayed with him. My studying law was a result partly of the inspiration I got from Msgr. Obiagba.

I can’t finish writing about Obiagba for he did a lot. As human, however, he had his weak points. That is why we always pray for the dead. I pray that Msgr. Nathaniel C. Obiagba find rest in the bosom of the merciful God and Father whom he served diligently.