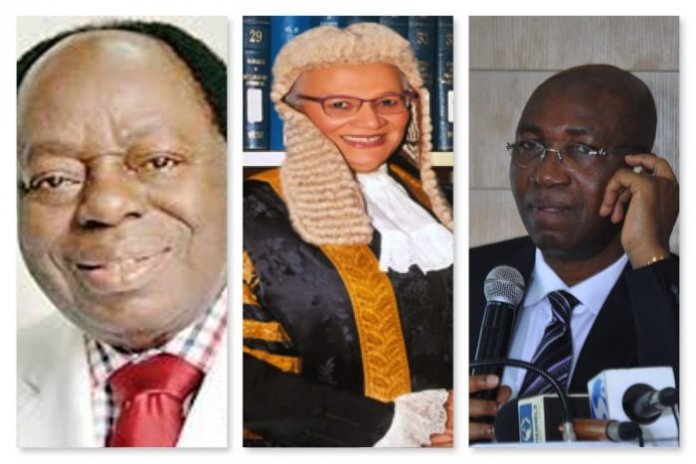 Two eminent lawyers, Chief Afe Babalola (SAN) and Chief Wole Olanipekun (SAN), have formally protested the heavy cost imposed on them and the harsh words directed at them by the Supreme Court at their appearance in relation to the Bayelsa State governorship election judgment.

Both lawyers represented the All Progressives Congresses (APC) and its candidates in the last governorship election in Bayelsa State – David Lyon Pereworinmin and Biobarakuma Degi-Eremienyo – in their request to the court to set aside its judgment, voiding their victory in the election.

The Supreme Court, in a ruling by a seven-man panel on February 26, 2020, dismissed the applications by the APC and its candidates, with Justice Amina Augie, in the lead ruling, rebuking both lawyers and awarding N30million punitive cost against each of them.

In two protest letters addressed to the National Executive Council (NEC) of the Nigerian Bar Association (NBA), Chief Babalola and Olanipekun are insisting that they did no wrong by asking the court to take a second look at its earlier judgment.

While seeking NBA’s intervention, they argued that they did nothing unlawful and unprofessional to warrant the harsh words used on them and the unprecedented cost awarded against them for merely carrying out their professional responsibilities as lawyers.

Babalola and Olanipekun warned that the decision of the Supreme Court, as it relates to them, was capable of laying wrong precedence that lawyers could be penalised for merely seeking to explore the justice administration process for the benefit of his/her client.

Both letters were addressed to the NBA President, Paul Usoro (SAN).

In his letter, to which he attached all processes in respect of the case, Olanipekun said: “I and the team of lawyers that I lead in the matter did no wrong, either in terms of our presentation through the filling of the application or during the oral adumbration in court.

“I repeat again, with every emphasis at my disposal and all sense of responsibility that I/we did no wrong, committed no error and did/do not deserve the harsh comments (to put it mildly) in the leading ruling of the Honourable Justice Amina Augie.

“It might interest you to note that there is no nexus or proximity or even bearing between the processes filed by us and the most unfair and least expected stern expressions of her lordship, Amina Augie.”

Part of Babalola’s letter reads:”I write to bring to the formal attention of the National Executive the Nigerian Bar Association, the unfortunate events which occurred that day, but more importantly, to protest and draw the attention of NBA to the danger posed to the due administration of justice by the disparaging remarks made in the ruling of the court concerning our principal, Afe Babalola SAN, CON and the imposition on him of the unprecedented costs of N30million.

“The action of the Court, aside from being unfair and totally unwarranted, is, if not urgently addressed, capable of sending a wrong signal to judges of courts, lower in hierarchy to the Supreme Court about how they can and should relate with lawyers, who appear before them to plead the case of their clients.

“This in the long run will be inimical to the development of trust and respect between the bar and the bench and will ultimately hamper the smooth operation of the justice delivery sector in Nigeria.

“It is with respect to their Lordships of the Supreme Court, who sat on the 26th of February 2020 that we state that the award of cost of N30million against Aare Afe Babalola SAN, CON failed to meet th standard set by that very court concerning the award of costs.

“Costs have never been imposed to intimidate counsel as is apparent in th cost orders made by the Supreme Court in this instance.

“The cost order lose sight of the fact that Aare Afe Babaloia SAN, CON, like every other lawyer, has a duty under the rules of professional conduct to devote his attention, energy and expertise and subject to any rule of law, to act in manner consistent with the best interest of his client.

“It is in the light of the above that we most respectfully request the ‘Nigerian Bar Association, though the National Executive Council, to look into this matter with a view to preventing a situation where the courts would seek to intimidate counsel and prevent them from either adequately presenting the cases of their clients or punishing them for doing so in a manner required of them under the rules of professional conduct.

“This situation, at the risk of repetition, if allowed to persist and gain footing, will do incalculable damage to the administration of justice in Nigeria.”