Home Opinions Agbakoba and Falana on How Governors are not Exercising Constitutional Powers on... 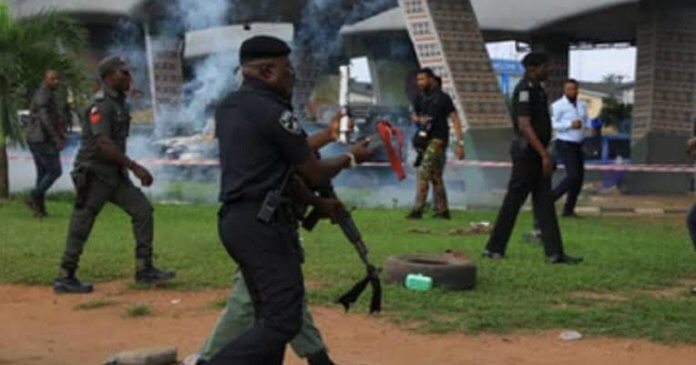 Nigerian governors have more powers under the 1999 Constitution of the Federal Republic of Nigeria (as amended) than they are exercising, foremost legal luminaries, Messrs Olisa Agbakoba (SAN) and Femi Falana (SAN), have said.

They advised the governors to take full advantage of these underutilised powers, while the fight for the restructuring of the country’s governance structure, to devolve more powers to the states, continue.

For instance, Agbakoba and Falana challenged the governors to begin to exercise their constitutional power to make inputs in the appointment of the Inspector-General of Police, which they had till now abdicated to the President.

The senior lawyers also called on the governors to seek to generate electricity independently for their states, in line with their constitutional powers.

Furthermore, Falana said if an individual could apply for a licence to bear firearms for self-protection, there was no reason why the Governor of Lagos State, for instance, should not be able to apply for about “10,000 firearms licences for young men and women to protect 20 million people.”

He said this was one of the reasons the Attorney General of the Federation, Mr Abubakar Malami (SAN), might be wrong in his pronouncement that the recently-inaugurated southwestern states joint security outfit, code-named Operation Amotekun, was illegal.

The lecture, organised by the Ikeja branch of the Nigerian Bar Association, was in honour and memory of the late human rights icon, the late Chief Gani Fawehinmi (SAN).

With the theme, “Federalism and the Judiciary in Nigeria,” it was chaired by Justice Ugochukwu Ogakwu of the Court of Appeal and had Agbakoba, a former NBA President, as one of the paper presenters, while Falana was the moderator.

In his opening remarks, Justice Ogakwu had noted that the kind of federalism being practised by Nigeria had been described by many as an aberration.

He pointed out that this was the basis for the perennial clamour for the restructuring of the country’s governance structure to give more powers to the federating units and make them self-sufficient, rather than dependants of the central government that they currently are.

Furthermore, Justice Ogakwu noted that while the Nigerian constitution provides for separation of powers among the three arms of government – the executive, legislature and the judiciary – the country’s reality was that the judiciary, and sometimes the legislature, had continued to be treated as an appendage of the executive.

He said the situation was not different in the relationship among the three tiers of government – federal, states and local governments – which was characterised by oppression and usurpation of powers.

Justice Ogakwu said, “Federalism, as practised in Nigeria, has been argued to be an aberration as the concentration of power and resources at the centre is said to stifle the growth of the sub-units.

“The continued clamour for restructuring points to the absence of the desirable model of Federal Government in Nigeria.”

The Justice said the question must be answered “whether federalism, as practised in Nigeria, has made the country stronger and economically sustainable?”

He called for vigilance among Nigerians, stressing that, “It is our collective responsibility to see that the true tenets of federalism are attained and practised.”

Where Nigeria got it wrong – Agbakoba

Agbakoba, who has been a strong proponent of restructuring until recently when he started canvassing for what he called “Cooperative Federalism,” said the late military dictator, Maj. Gen. Johnson Aguiyi-Ironsi, was to blame for the fix in which Nigeria has found itself.

Aguiyi-Ironsi, Agbakoba recalled, was he who, in 1965, introduced the unitary system of government, concentrating power and resources at the centre and collapsing the regional governments by reversing the structure installed by then British Colonial Secretary, Sir Oliver Littleton.

He said the problem was compounded by various military interventions, with “the (late Gen Sani) Abacha disruptions making it difficult to break away from the shackles.”

“Aguiyi-Ironsi reversed Oliver Littleton by introducing a unitary structure and it is that mistake that we are suffering today,” Agbakoba said.

He also described the 1999 constitution introduced by former Head of State, Gen. Abdulsalami Abubakar, as illegal, saying it had failed to resolve the fix created by Aguiyi-Ironsi’s 1965 decision.

“We are 300 odd sub-nations in Nigeria; six major sub-nationalities, which (the late) Vice-President Alex Ekwueme described as geopolitical zones. If those zones had been constitutionalised, we will have no problem. That is the challenge we face. How can we overcome and overturn the Abdulsalami constitution?” Agbakoba said.

Why restructuring is important – Falana

Falana said since the country fared better with regional governments, everything lawful must be done to go back to that system.

He said, “The Yoruba say, ‘Oh god, if you cannot improve my life, leave me where you met me.’

“The question we should be asking is: ‘When did the rain start to beat us?’ 1966. Where were we in 1966? We had regions and we were running the country and that was the best period of development in our country. All we are therefore asking is: Take us to where we were before the illegal intervention of military dictators.”

Why restructuring is difficult – Agbakoba

But Agbakoba pointed out that as desirable as restructuring was, it had been difficult to achieve because the political elites, who are profiteers of the current lopsided system, were opposed to it.

“I will not, if I were President, reduce my power, unless I am a visionary leader. So, it is up to us as civil society to make demands of our government, either by street protests or court.”

Agbakoba said apart from the political elite’s opposition, ethnic suspicion was also a major stumbling block on the path to restructuring.

He said the Northern region, particularly, must be convinced that they have a lot to benefit if the country’s governance restructure was restructured.

He said, “We all know that restructuring is a southern language, therefore, our brothers in the North must be carried along. Because I am northern and southern, I understand their issues. Some of them will tell me that restructuring will break up Nigeria and I always tell them that, ‘No, it will empower the regions’.

“In order to deal with the issue of restructuring, we must first enter into their head. We need to know the temperature and the language, we need to convince our northern brothers that regionalism is good for everybody because the governors in the North are as weak as the governors in the South.”

Agbakoba observed that the agitation for restructuring and the failure to make any headway was hurting the country. He said it was for this reason that he came up with the new concept of “Cooperative Federalism,” to address the disagreement and suspicion among the political regions.

He said, “We need to accommodate our northern brothers in order for the restructuring debate to move forward. And if you can’t do that, the other lesser opportunity is to practise what I call ‘Cooperative Federalism’.”

But Falana disagreed with Agbakoba that restructuring was a language of the South.

He said, “Restructuring is no longer a southern affair. In the manifesto of the APC, restructuring is well spelt out and we have a right to talk to them as lawyers.

“When Nigerians challenged the regime on its promise to restructure, the regime then set up the El-Rufai committee and one of the recommendations of that committee is the establishment of state police. But the governors are not committed to restructuring.”

Making the best of a bad situation

Both Falana and Agbakoba, however, agree that states have more room to operate than they are currently doing even within the current 1999 constitution, as faulty as it is.

Agbakoba said, “Under the illiberal constitution given to us by Abdulsalami, there is enough space for our governors to do a lot.

“Not a single governor has ever asked any President to convoke the Nigeria Police Council. The appointment of the Inspector-General of Police, under the constitution, is not the sole prerogative of the President.

“In the constitution, the 36 state governors are supposed to have an input. The question is: why have they not been doing so? So, it not enough to be shouting restructure.

“Why is it that no governor, apart from Tinubu, has established a power plant? Under the constitution, they have the powers. Why is no demand being made by our governors?

“I think the take-home message here is to write letters to all the 36 governors, telling them, ‘We know you made feel handicapped; but if you look at the constitution, the Exclusive List that sets out 16 items; the Concurrent List that sets out 30, and the Residual List that is silent, you have more powers than you know. So, why are you not using them?’”

Agreeing with Agbakoba on the role of governors in the appointment of the IG, Falana said he had already gone to court to compel the governors to wake up to their responsibilities.

He said, “I am already in court, Femi Falana v Attorney General, where I am challenging the governors for not participating in the meeting of the Nigeria Police Council.

“By Section 216, you cannot appoint or remove an IG without consulting the Nigeria Police Council. Since 1999, the President removes the IG, the governors will hear of it on radio. He will appoint one to act; he will retire some. Then the President will summon a meeting of the Police Council and then circulate the CV of the acting IG and say, ‘This is my new IG’ and they will clap for him. That is not how to operate a federal system of government. We have to struggle; we have to fight.”

Amotekun as feature of clamour for true federalism

Agbakoba said the current debate on the legality of South-West security outfit, Operation Amotekun, goes to the root of the clamour for true federalism.

While urging the South-West governors to go to court to challenge the AGF on the legality of Operation Amotekun, Agbakoba said, “I cite this example to show the huge problem we confront in talking about regionalism. It is not going to be easy. We must be prepared to pay the price; it is either street action or court action. If we haven’t got the guts, then my theory is to take advantage of what we have in the unitary constitution.”

For Falana, the debate on the legality of South-West Operation Amotekun had exposed the deception that the current system was working.

He said the system was full of contradictions.

“In 2003, President Obasanjo established the Nigerian Security and Civil Defence Corps under an Act of parliament; that is a separate police force. Their Controller-General does not report to the IG. Apart from these institutions, the prisons, now correctional service, Immigration, Customs, EFCC, ICPC, etc, have been authorised to carry gun and they are not answerable to the IG.

“In the North-East region, particularly Yobe and Borno, there is a civilian JTF, well armed; and sometimes when the soldiers are afraid they ask the civilian JTF to go and confront Boko Haram.

“In Kano and Sokoto, you have Hisbah. Three weeks ago, Hisbah in Zamfara arrested a policeman; they said the policeman was caught in a hotel with three women and they said that was an abomination.

“The point I’m making is that the Nigerian state has collapsed; we are deceiving ourselves.”

Nigerian Hospitals and the Law as Hope for Gunshot Victims

Debate Over New Police Act and Implications for Criminal Prosecution

#EndSARS: Restorative Justice Practitioners Should be in Judicial panels of inquiry – Lawyer