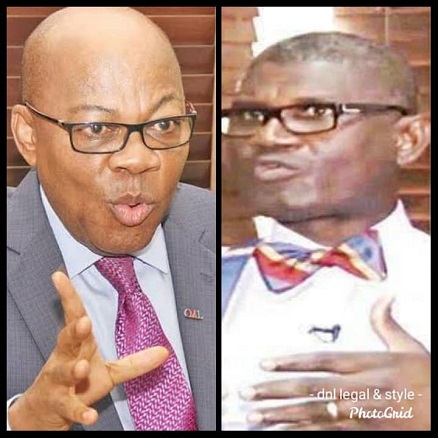 Two senior lawyers have expressed divergent views on the ‘sovereignty clause’ in the $400m commercial loan agreement between Nigeria and China.

The clause has pitted critics and the National Assembly against the Federal Executive Council (FEC).

The opponents argue that the clause ousted the nation’s sovereignty, should Nigeria fail to repay the loan.

They explain that such a clause should not have been included in a commercial agreement.

But, a former President of the Nigerian Bar Association (NBA), Dr. Olisa Agbakoba (SAN), said there is nothing to worry about.

He dismissed the claim that such a clause ousted the country’s immunity.

According to him, the clause “is an error” which should not have been inserted

The loan pact was signed by the Federal Ministry of Finance on behalf of Nigeria and the Export-Import Bank of China on September 5, 2018.

The contentious clause states: “The borrower hereby irrevocably waives any immunity on the grounds of sovereign or otherwise for itself or its property in connection with any arbitration proceeding pursuant to Article 8(5), thereof with the enforcement of any arbitral award pursuant thereto, except for the military assets and diplomatic assets.”

The ministers clarified that the lawmakers must have misconstrued the concepts of international diplomatic immunity and commercial immunity.

Agbakoba agreed, adding that the appropriate term for the clause is “a waiver of immunity clause” and that it is a standard contractual provision.

The senior advocate observed that the waiver of immunity clause was at work recently when Zambia lost assets to China after it defaulted on repaying a loan.

Agbakoba said: “Zambia was not able to use sovereign immunity to avoid debt repayment.

“If you have good standing internationally, for instance, America will not waive its sovereign immunity because America is good for credit. Unfortunately, few African countries are not good for credit. So, it is the credit worthiness issue that is the problem.”

On the controversy triggered by the clause, Agbakoba said: “When the National Assembly began to make all the noise, it beat me hollow; they absolutely got it wrong. There’s nothing like sovereign immunity clause.

“It’s a contractual clause that simply says ‘if you don’t pay, we’ll go after your assets.”

Quakers said: “No country will willingly cede its sovereignty to another country on the basis of a contractual arrangement.”

He, however, observed that the agreement seemed to put China in a position of power over Nigeria, Quakers said: “As far as I am concerned, I haven’t seen the agreement itself, but I’ve read some extracts here and there concerning the clause.

“The only thing I see there is like an unfair contract, a situation where someone has an upper hand, an edge over you. By saying ‘Ok, you want this facility, I’ll give it to you, but in the unlikely event of a default, you will not define assets that I will hold on to, to liquidate the debts.”

Agbakoba said the government should have taken time to think through the deal carefully.

“That agreement should also have been subjected to some scrutiny, not necessarily by government lawyers, but even by those in the private sector, particularly in commercial practice ‘Please look at this, what do you think and then advise the government accordingly.’”

“That, for me, is the error in terms of the agreement. It’s actually an error,” Quakers added.

Why I am studying to Become a Lawyer – Adekunle Kaosara...