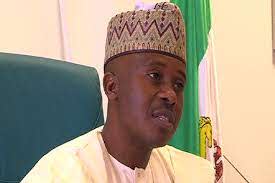 The Court of Appeal in Abuja has ordered former House of Representatives member, Farouk Lawan to return to the High Court of the Federal Capital Territory (FCT) to defend himself in the $500,000 bribery case pending against him.

In a judgment on Tuesday a three-man panel of the Court of Appeal was unanimous in dismissing Lawan’s appeal for lacking in merit.

The appellate court upheld the October 17, 2019 ruling by Justice Angela Otaluka of the High Court of the FCT, rejecting Lawan’s no-case submission.

Justice Peter Ige, who read the lead judgment of the Court of Appeal, held that, as against the appellant’s claim, there was no injustice occasioned against Lawan by Justice Otaluka’s ruling ordering him to enter his defence in the trial.

Justice Ige resolved the four issues, distilled for determination in the appeal, against the appellant.

The judge said: “I have also read the records of appeal, particularly the evidence of PW1 to PW5, the ruling of the High Court and the argument of parties to this appeal and I am of the firm view that the review of the evidence by the lower court was not slanted in favour of the prosecution against the appellant.

“The lower court was expected to be brief in its analysis of the evidence at the stage of the no-case submission. In any event, what calls for examination on a no-case submission is whether there’s any evidence from the prosecution, no matter how slant, linking the defendant with the commission of the offences for which he was charged and whether the evidence linking the defendant has been discredited during cross-examination.

“The trial court is also called upon, at the no-case submission stage, to find out f the evidence or ingredients of the offences for which the defendant s charged have been established and not to go into any elaborate or extensive review of evidence of witnesses

“The lower court was right in its decision, calling on the appellant to enter his defence.”

Lawan is being prosecuted by the Independent Corrupt Practices and other related offences Commission (ICPC) for allegedly collecting 500,000 dollars part of a $3 million bribe.

The ex-lawmaker was alleged to have demanded money to facilitate the removal of Otedola’s company, Zenon Oil, from the list of firms indicted by the House of Representatives’ Ad-hoc Committee which probed fuel subsidy abuse in 2012, which Lawan was the Chairman.

The prosecution called five witnesses and closed its case, following which Lawan made a no-case submission, which was rejected in a ruling by Justice Otaluka on October 17, 2010.

Rather than entering his defence, as ordered by the trial court, Lawan, through his lawyer, Mike Ozekhome (SAN) appealed the ruling, which appealed was dismissed by the Appeal Court on Tuesday, for lacking in merit.