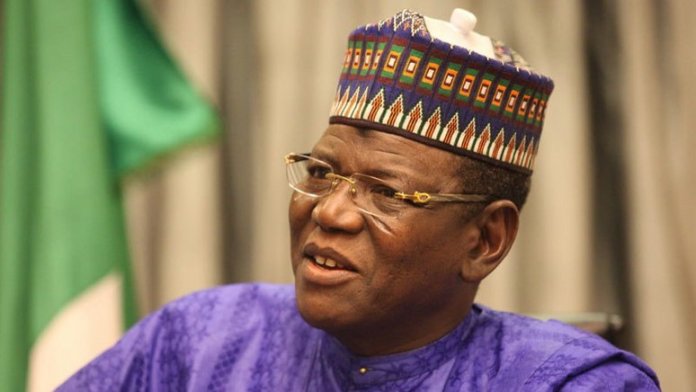 The trial of former Jigawa State Governor, Sule Lamido resume today at the Abuja division of the Federal High Court on a 43-count amended charge bordering on abuse of office and money laundering to the tune of N1.35 billion.

He was re-arraigned by the  Economic and Financial Crimes  Commission (EFCC) before Justice Ijeoma Ojokwu.

The case had previously been heard by Justices Adeniyi Ademola, and Babatunde Quadri, before its eventual transfer to Justice Ojukwu, by the Chief Judge of the Federal High Court, Justice Abdul Kafarati.

Mr Lamido had earlier challenged the transfer of his case at the Federal High Court, Abuja from Justice Adeniyi Ademola (now retired) to Justice Babatunde Quadri for determination.

Mr Lamido was arraigned alongside two of his sons ; Aminu Lamido ,and Mustapha Lamido; Aminu Wada Abubakar, Bamaina Holdings Ltd and Speeds International Ltd for allegedly defrauding the state to the tune of N1.35 billion.

Lamido allegedly abused his position as governor between 2007 and 2015 by awarding contracts to companies where he had interest, using his two sons as fronts.

Lamido was equally alleged to have collected kick backs from contractors in the state, with the funds allegedly paid into accounts that were managed by his sons.

Led in evidence by prosecution counsel, Chile Okoroma, a prosecution witness, Micheal Wetkas, an investigator of the EFCC, had narrated how investigations began in 2013, and how the Commission’s investigation and forensic team discovered that huge sums had been paid into Dantata and Sawoe Construction Company’s accounts in Intercontinental (now Access Bank), Zenith and Sterling banks from the Jigawa State treasury.

“The second defendant (Aminu Sule Lamido) was arrested in 2012 at the Aminu Kano Airport in possession of undeclared funds. When the matter was eventually referred to the Commission, preliminary investigations revealed his links to a number of companies which we further investigated.

“In the course of investigations, we discovered that during the time Lamido was the governor of Jigawa state, Dantata & Sawoe Construction Company was the biggest and the main  contractor at the time. We also discovered that between 2007 and 2013, the company had been awarded contracts with a cumulative cost up to N30bn.”

According to him, investigators requested for and were furnished with journals from Dantata & Sawoe Construction Company. He said: “However, we discovered discrepancies in the journals received. “We wrote letters to Dantata and Sawoe requesting for a summary of contracts awarded to their company by the Jigawa State Government, as well as a summary of payments received from the state’s accounts. They obliged.”

Furthermore, Wetkas revealed that on April 18, 2008, two cheques to the tune of N14, 079,595 and N10, 377,310 respectively were transferred in favour of a company, Speeds International in which Lamido is signatory. The witness tendered the cheques as exhibits.

Particulars of count one of the new charge reads: ”That you, Alhaji Sule Lamido, while being the governor of Jigawa State, Nigeria, on or about 15th of December, 2008 within the jurisdiction of this Honorable Court in your account in the name of Bamaina Holdings (also referred to as Bamaina Holding Limited) domiciled at Unity Bank Plc, Kano, converted the sum of N14,850,000.00 being the value of Intercontinental Bank Plc (now Access Bank Plc) cheque no;00000025 paid by Dantata & Sawoe Construction Company Limited which represented the proceeds of your illegal act to wit: using your position as a public officer for gratification by purportedly obtaining contracts for company in which you have interest from Dantata & Sawoe Construction Company Nigeria Limited which was awarded contracts by Jigawa Sate Government with the aim of concealing its illicit origin and thereby committed an offence contrary to Section 14(1) (a) of the Money Laundering (Prohibition) Act, 2004, and punishable under Section 14(1) of the same Act”.