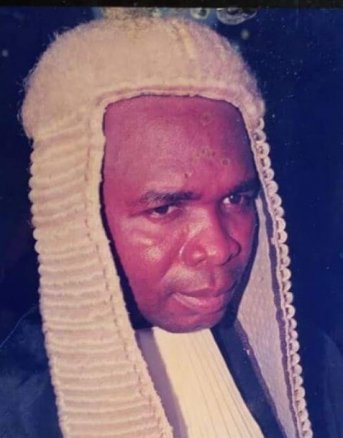 Courts in Anambra State today were shutdown to mourn the sudden death of a Judge of the State High Court, Hon. Justice D.O.C. Amaechina.

Justice Amechina until his unexpected death on 29th February, 2020 was the Admin Judge of the Anambra State High Court.

Prior to his elevation to the bench inn 2004, Justice Amechina was a Law Officer in the Civil Litigation Department of the Ministry of Justice in Anambra State

According to Mr. Ifeanyi Agwuncha, a Senior State Counsel Anambra State Ministry of Justice, Justice Amechina’s death came as a shock. In his words;

It is sad saying good night. However it is the fate that awaits all mortals. In the morning hours of yesterday, 29/2/2020 you took the perpetual bow.

It was a shock to the legal community nationwide especially Anambra State as there was no sign that death was in the offing, you carried out your duties efficiently in your usual ebullient fashion.

This World is a temporary abode. One day we shall all return to the Creator. This is the fate of all and we don’t know when nor how, mystery of life! My Lord you were a shining light, a reference point and source of pride to those of us in the employ of Government as Law Officers.

Prior to your elevation as a High Court Judge, you performed brilliantly as a Law Officer handling tons of civil cases in the Civil Litigation Department of the Ministry of Justice for the Government, several of your cases are reported in the Law Reports.

You got the moniker “Technical” which resonates with your eye for perfection to the minutest details, a thorn in the flesh of sloppy adversaries! You did show that the Ministry of Justice is no haven for brawns, there are brilliant assiduous Lawyers in the employ of Government.

When you were elevated 15 years ago, it was generally accepted as well deserved, a round peg in a round hole. Life like every mortal had its toll on you but you surged on after the demise of your spouse and ill health. Surely you left indelible mark.

On their parts, Deacon Dele Adesina SAN and Dr. Ajibade SAN have also expressed their condolence to the family of the deceased and the entire legal community over the sudden death of his Lordship.

Deacon Adesina wrote: “on behalf of my family and Dele Adesina LP condole with the entire family of Late Justice D.O.C Amaechina whose sudden death occured in the early hours of this morning. His Lordship Amaechina. J was until his death this morning the Administrative Judge of the Awka Division of the Anambra State Judiciary.

My heartfelt condolences to the immediate family of the departed great jurist, the entire Bar in Anambra State and the Government and good people of Anambra State.

“My condolences go to his family, the Bench and the Bar in Anambra State. “May the soul of the departed rest in peace in the bosom of the almighty.”