Home Opinions Award or Denial of SAN is an Absolute Privilege, Immunizes the LPPC... 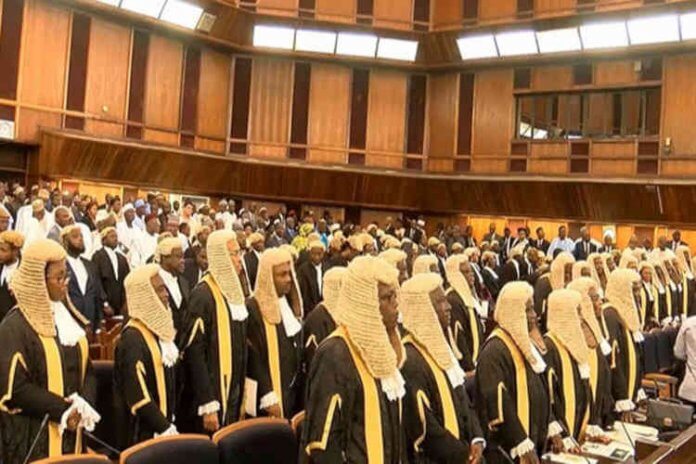 In the Part One of this discussion, published under the title, “Can A Court Restrain or Compel the Legal Practitioners Privileges Committee (LPPC) In Respect of Award of SAN In Nigeria?”, I had held the view that no court can compel or restrain the Legal Practitioners Privileges Committee in respect of process of award of SAN. See also “Limits of Influence of Courts of Law In the Process of Award of the Rank of SAN In Nigeria” (LawAndJustice, 22 November 2020),  The present part (Part Two) was triggered by some reactions to the first part. One of such suc reactions went thus:

“Although the rank of SAN is conferred at the discretion of the LPPC, it has to be exercised according to the relevant extant laws. The arising implication is that the discretion to be so exercised isn’t absolute, or without restraint. Besides, the LPPC doesn’t enjoy any immunity conferred on it against any legal action, in the event that its right of discretion in the performance of its function isn’t being or hasn’t been exercised according to law, or is being wrongly exercised in breach of the law.”

With the greatest respect to the lawyers who hold views represented by, or similar to, the one reproduced above, or those who outrightly insist that “there is nothing like absolute privilege,” I think they all have completely missed it. Absolute privilege exists in law, in some instances. The discretion of the LPPC is absolute as far as powers given to it, by section 5 of the Legal Practitioners Act (LPA) for conferment of the rank of SAN, goes. The law recognizes certain occasions in regard to which the public interest requires that a person or group should be protected from legal liability for a statement or action even though the statement/action might be seen as improperly made/taken or actuated by malice or wrong motives. This kind of protection or privilege is of two kinds — absolute and qualified. Where the privilege is “absolute”, defendant’s malice does not destroy the privilege, in view of its absolute character. Where the privilege is “qualified”, presence of malice destroys the privilege.

In view of the above, I respectfully repeat my position, that the court cannot compel the LPPC to award the rank, or to refrain from awarding same, to anyone. If it were otherwise, many lawyers who obviously deserve the rank, but have apparently been improperly denied same, would have flooded our courts with lawsuits, each seeking to compel the LPPC to do the needful. Further, some lawyers who feel they have been unjustly denied the rank, especially on account of petitions (alleging professional misconduct), filed against them by some other persons, would have approached the court to strike down LPPC`s decision using the judgement in Amaechi v. INEC as their ground, because, according to the Supreme Court, in that case, no citizen deserves to be denied anything otherwise due to him, on account only of a mere allegation unproven before a court of law. In Amaechi v. INEC (2008) 5 NWLR (Pt 1080), the Apex Court (per Oguntade. J.S.C):

“I say again that convictions for offences and imposition of penalties and punishments are matters appertaining exclusively to judicial power.   See Sokefun v. Akinyemi [1980] 5-7 S.C. (Reprint) 1; [1981] 1 NCLR 135; Garba v. University of Maiduguri [19861 1 NWLR (Pt. 18) 550. An indictment is no more than an accusation… The jurisdiction and authority of the courts of this country cannot be usurped by either the Executive or the Legislative branch of the Federal or State Government under any guise or pretext whatsoever….It is not a simple matter to find a citizen of Nigeria guilty of a criminal offence without first ensuring that he is given a fair trial before a Court of Law….It is simply impermissible under a civilized system of law to find a person guilty of a criminal offence without first affording him the opportunity of a trial before a court of law in the country. …Indeed, it is a subversion of the law and an unconcealed attempt to politicize the investigation and prosecution of criminal offences.”

Beside the aforesaid, “privilege” is an exception to legal right or duty; failure to grant a privilege does not subject the actor to any form of liability, unlike a breach of duty, which subjects the actor to some liability (Garner, Ibid). A privilege is awarded, granted, or given, unlike a right which is an inherent, irrevocable entitlement held by all citizens or all human beings from the moment of birth. The word “granting” is crucial to understanding the difference between “privilege” and “right”. As rights are not granted/awarded/conferred by anyone, they cannot be taken away or altered by anyone. Rights are inherent; they belong to all of us equally, simply by virtue of the fact that we are human. Indeed, properly understood, the Constitution does not exist to give us our rights, but to protect the rights we are born with. Privileges, on the other hand, do not belong to all. They are given to some and withheld from others. Privileges are unequal by nature. Denial of privilege does not result in any legal liability, unlike denial of right. This is why grant of the rank of SAN is a mere privilege, not a right.

ALSO READ   Right to be Forgotten: How Nigeria Missed a Golden Opportunity

Although, sometimes, grant of privilege is conditional, fulfilment of such condition(s) does not automatically entitle one to the privilege. This is the case with award of SAN by the LPPC, because there is no legal duty upon the LPPC to award the title to a person merely upon that person`s fulfilment of all set conditions. In effect, fulfilment of such conditions is merely an invitation to treat. Until LPPC actually confers the rank upon a person and the person in turn accepts same, an offer cannot be said to have been made to such a person, capable of being accepted in order to give rise to an enforceable contract. The LPPC usually advertises that applicants should come forward and fulfil certain conditions, to prove they are suitably qualified for consideration for the award of the rank of Senior Advocate of Nigeria (SAN), which appears to be in the nature of an offer, made to the whole world, as was the case in Carllil v. Carbolic Smoke Ball [1892] EWCA Civ 1, that could be accepted by one or a group to give rise to a binding and enforceable contract. In that case, the court had held that an advertisement containing certain terms to get a reward constituted a binding unilateral offer that could be accepted by anyone who performed its terms. This is different from the advert or call for applications by the LPPC, because, unlike was established in the Carllil case, there is in the present case, absence of any indicated intentions or assurances on the part of the the LPPC. Thus, whether one fulfils the advertised conditions or not, the LPPC does not have any duty or legal obligation to award you SAN. A legal obligation is a legal duty that an individual can be forced to perform or penalized for neglecting to perform.

Finally, the difference between a privilege and a right may also be explained by reference to “power” and “duty”. The LPPC has a power, but not a duty, to award SAN. Its power here is discretionary, and the manner of exercise of the discretion is not compellable/enforceable. There were two perfectly obvious examples, among many, of wrongful denial of the rank of SAN to obviously deserving lawyers in Nigeria. One was the case of Chief Gani Fawehinmi and the second was the case of Mr. Femi Falana. Each of whom had been denied the SAN rank for so many years. Of course, each could have gone to court to compel the LPPC; yet, neither went to court; this, perhaps, was/is because they knew such suit would not succeed in court, since award of SAN is an absolute privilege entirely within the power of the LPPC to grant to whomsoever it pleases. Another case was reported of Dr. Olumide Ayeni who finally got awarded the SAN rank in 2020, upon his 10th application. He was denied the rank on nine previous occasions, yet he did not go to court. This perfectly illustrates my point that, although anyone who is denied the rank is entitled to go to court, the case would fail for the reason I have set out in my earlier submissions. Similarly, anyone who drag the LPPC to law for purposes of compelling it to withhold the award from any lawyer to whom the LPPC has decided to award same, is merely chasing after shadows. This, I respectfully submit, is the fate of the case filed by Hon. Friday Sani Makama, at the Federal High Court, against the LPPC, for nominating Barrister Abdul Wahab Mohammed for the title of Senior Advocate of Nigeria (SAN). (“Former Kogi House Of Assembly Member Sues LPPC For Nominating Abdulwahab Mohammed as SAN”; (published on TheNigeriaLawyer)

This is my humble opinion, without prejudice to whatever the court may choose to do.

In respect of complaints regarding rampant withholding of the SAN rank from, or undue delay in awarding the rank to, lawyers who are genuinely deserving of same (Fawehinmi, Falana, Ayeni, etc), please, permit me to recall my comment in 2009, which remains my position till date:

“[the] argument that giving the title to too many lawyers a year would diminish the prestige of the office and high standing of the law profession is untenable. After all, there is really no justification for denying some deserving applicants of the title if truly it is based on merit; what is good for the goose is equally good for the gander.”

Investor’s Loss and Liability for Negligence ...

Fintech Update – Synopsis of the New CBN Regulatory Regime for...