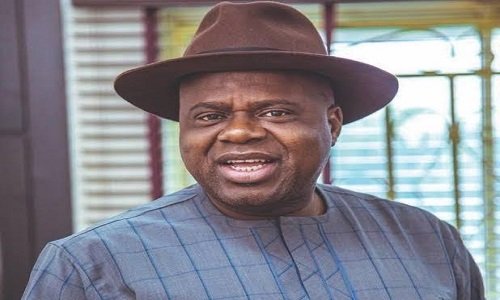 A move by a factional group of the Advanced Nigerian Democratic Party (ANDP) to join in Governor Douye Diri’s appeal against the judgment of the Bayelsa State Governorship Election Petition Tribunal on Monday, suffered a setback as the Court of Appeal in Abuja dismissed their request for being incompetent and lacking in merit.

Governor Diri had, last month, approached the appellate court to set aside the majority judgment of the tribunal which nullified the November 16, 2019, Bayelsa governorship election that brought him to power.

The nullification was predicated on the petition of the candidate of the ANDP in the November 16 governorship poll, Mr Lucky King-George, against his exclusion from the poll by the Independent National Electoral Commission (INEC).

The majority decision had upheld his argument that he was unlawfully excluded from the poll and subsequently ordered INEC to conduct a fresh poll in the state within 90 days.

However, when the matter came up on Monday, a lawyer, Mr Dominic Anyiador, announced appearance for the factional group led by its Chairman, Mr James Femowei, and drew the court’s attention to their application seeking to be joined as an interested party in the appeal filed by Governor Diri.

They told the appellate court that they were unaware of the petition filed by the party challenging Diri’s election at the tribunal.

The applicants disclosed that the party did not conduct any primary election or fielded candidates for the governorship election, hence, their adoption and endorsement of Diri and his deputy, Lawrence Ewhrudjakpo, as its preferred candidates in the election.

They also claimed that Charles Ogboli, the national chairman of the party, who filed the petition, was expelled in 2018.

“The 1st respondent (ANDP) as a political party endorsed and adopted his excellency Senator Douye Diri and his deputy Lawrence Erhujakpor as its gubernatorial candidates in the said November 16, 2019 gubernatorial election conducted by the 3rd (INEC) respondent in Bayelsa State,” the application stated.

“The judgment of the lower court nullifying the election of the governor of Bayelsa State came to the interested parties and other members of the 1st respondent as a rude shock reason being that they were/are not aware of any pending suit by the 1st respondent against the governor of Bayelsa State bordering on his election held on the November 16, 2019.

But in a quick objection, the lawyer to the Ogboli-led ANDP, Mr Kehinde Ogunwumiju (SAN), urged the court to dismiss the application on the grounds that the court lacked jurisdiction to take the motion not being an election matter but inter-party affair.

He also said the applicants cannot be joined to the suit at the appeal stage because they were not parties at the tribunal.

Also, Ogunwumiju said the applicants had failed to seek the leave of court before filing their application.

In a short ruling, a three-man panel of Justices led by Stephen Adah dismissed the request for joinder.

Adah said the application is “irrelevant, prejudicial and waste of judicial time”.

The court also ordered the applicants to pay N200,000 to each of the appellants as well as the respondents in the suit.

The court then adjourned till September 23 for hearing of all pending motions in the appeal.