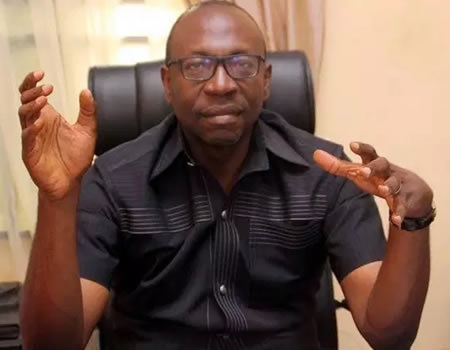 Justice Emmanuel Ahamioje of Benin High Court has again adjourned hearing till Friday, June 19, in the suit seeking to restrain the All Progressives Congress (APC) from recognising Pastor Osagie Ize-Iyamu as an aspirant in the party’s governorship primary scheduled for June 22 in Benin City. Justice Ahamioje who gave the defendants 24 hours to file their response at the last sitting had earlier refused to grant an exparte application seeking to restrain the ruling party from recognising Ize-Iyamu as an aspirant in the party’s primary. The suit by Kenneth Asekomhe, the state deputy chairman of the party, Benjamin Oghumu, Mathew Ogbebor and Unweni Nosa is challenging the membership/waiver granted to Ize-Iyamu by the party’s National Working Committee (NWC). At Wednesday’s resumed hearing, counsel to the first and second defendant, Mr Victor Ohiosumua, told the court that he was supposed to take his first and second preliminary objection and then take the originating summons itself together. Ohiosuma said: “But unfortunately, as we were moving for the first and second preliminary objection we were just served today by the clerk, and the rules of court are very clear on the subject that we need time to file our response because of that the hearing could not go on today.”
ALSO READ   NBA 2020 Election: "I Will Appeal ECNBA's Verdict" Adesina Ogunlana Reacts to His Disqualification