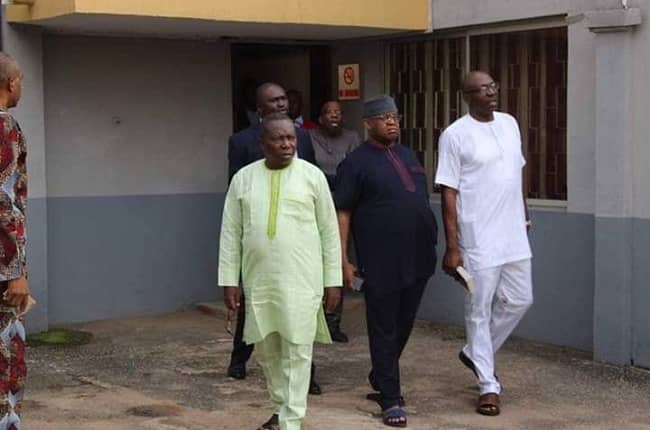 According to a release by the EFCC, the other four defendants are Lucky Imasuen, former deputy governor of Edo State; Chief Dan Orbih, PDP chairman in Edo State; Tony Aziegbemi and Efe Erimuoghae.

At Thursday’s sitting, prosecution counsel, Francis Jibro told the court that the matter was for ruling on the competence of the eight-count charges preferred against the defendants.

The presiding Judge, M. G. Umar, ruled that the charges filed by the Commission against the defendants were not defective. The defendants had at the last sitting, challenged the charges on the ground that they contained the name of Chief Tony Anenih, who is now deceased.

Soon after the ruling, counsel to the first defendant, Charles Edosomwan, SAN, told the court that he has filed a motion challenging the jurisdiction of the court.

“In spite of the ruling, we have a motion dated June 1 2020, challenging the jurisdiction of this honourable court to entertain proceedings”. The same position was canvassed by counsels to the other defendants.

“The stage is set for us to proceed based on the ruling of the court this morning, not this motion. My Lord has ruled that any objection can be taken after the plea has been taken. No exception.”

Ferdinand Orbih, SAN, counsel to Dan Orbih said he was not challenging the ruling of court but the jurisdiction of the Federal High Court to hear the matter.

Justice Umar adjourned the case to July 2, 2020, for hearing.

Pastor Ize-Iyamu and other defendants were first arraigned before Justice P. I. Ajoku on an eight-count charge bordering on money laundering on May 24, 2018.

The defendants were alleged to have sometime in March 2015, in Benin City, directly taken possession of the sum of N700 million without any contract award which sum was allegedly part of proceeds of an unlawful act, to wit: fraud and corruption.

One of the count reads: That you Pastor Osagie Ize-Iyamu, Lucky Imasuen, Tony Azigbemi, Chief Dan Orbih, Efe Erimuoghae Anthony and Chief Anthony Anenih (now at large) sometime March 2015 in Benin within the jurisdiction of this Honourable Court did directly take possession and control of the sum of 700,000,000.00 (seven hundred million naira) only without any contract award which sum you reasonably ought to have known form part of proceeds of an unlawful act, to wit; fraud and corruption and thereby committed an offence contrary to Section 15(2)(d) of the Money Laundering (Prohibition) Act 2011 (as amended by the Money Laundering (Prohibition) Amendment Act 2012 and punishable under Section 15(3)of the same Act.