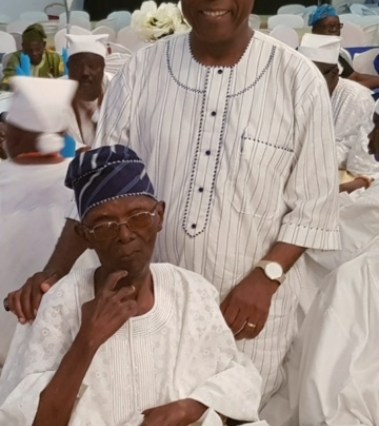 Retired judges of the Lagos State Judiciary yesterday paid a courtesy visit to one of their own, Justice Isiaka Oluwa, aged 101.

They were received by his wife, Olaide, who ushered them into the family’s large sitting room at his Ilupeju, Lagos residence. The visit by the retired judges to Justice Oluwa was the first of its kind in the history of the Lagos State Judiciary.

He was appointed a judge of the Lagos judiciary in 1974 and retired 37 years ago having attained the mandatory age of retirement.

In his remarks, Justice Olorunnimbe said: “we are making history today as retired judges of the Lagos State Judiciary. This courtesy visit is to let you know that we have not forgotten you”.

He said they deem it fit to share felicitations with him now that he is still alive adding that they will also be with him when he clocks 102 years.

Olorunnimbe described Justice Oluwa as a “very remarkable judge and a beacon of hope to all of the retired judges of the Lagos Judiciary”.

He recalled that he had a wonderful time on the bench of Lagos Judiciary.

ALSO READ   Derivation Funds: Delta State Govt Yet To Comply With 2016 Judgement To Give Account of

“We pray to attain your age but not to surpass it. We pray Almighty God to give you more life and good health”, he prayed.

In a vote of thanks, Mrs. Olaide Oluwa, thanked the judges for the felicitations extended to their family.

She expressed appreciation to them and prayed God to give judges on the bench of the Lagos Judiciary with wisdom with which to determine cases brought before them.