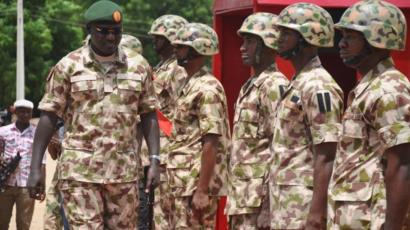 My attention has been recently drawn to a report by Premium Times,   https://www.premiumtimesng.com/news/headlines/386123-exclusive-boko-haram-war-nigerian-army-suspends-voluntary-retirement-of-soldiers.html published on 5th of April 2020, which was also reported by other online news sites.

An internal memo released by the Echelons of the Nigeria Army, goes to the effect that The Nigerian Army has suspended approvals for voluntary retirement requests from soldiers.

Although the position is still under banter of contention, I strongly urge the  Top Brass of the Nigerian Army to quickly jettison the idea as much as it conceived it, because not only is it illegal, it is also beyond its pay and power to make such  order.

Having read and analyze the above position, and keeping in mind the provisions of the 1999 Constitution of Nigeria (as Amended), Nigeria Pension Act, The Armed forces Act, Public service rules, Armed forces Pension Act and the Guidelines on Administration Military Pension for personnel of the Armed Forces of Nigeria;   I submit that the Nigeria Army has no Legal right to suspend or stop Voluntary retirement of Army Officers in Nigeria.

I further submit that if at all such order can be made, it can only be made by the President of the Federal Republic of Nigeria, in line with section 26 of the Armed Forces Act or the National Assembly in accordance with its Constitutional Powers in Section 4 of the 1999 Constitution (as amended).

“The President may make regulations governing the commissioning of officers, their terms of service, promotion, retirement, resignation, dismissal and such other matters concerning officers of the Armed Forces as may seem to him necessary”

Going from the above, only the President has the powers to make such regulation has to suspension or cancellation of voluntary retirement of Army officials in Nigeria, and not the Echelons of the Nigeria Army.

I say this mindful of the fact that the Nigeria Armed Forces Act is a superior legislation, due to the fact that it derives it powers from the express direction of the Section 217-220 of the 1999 Constitution of Nigeria.

Suffice to say that the reading the gamut of section 3 Of the Armed Forces pension Act and the provisions of the  guidelines on Administration of  Military Pension for Personals  of the Armed Forces of Nigeria  quickly shows it’s  positive disposition for Voluntary retirement.

No part of these Laws, stated above, empowers the Top brass of the Military Echelon to bar or suspend the application for voluntary retirement of Military Personnel, in itself.

Holding that a military officer cannot voluntarily retire, and must continue in active military duty against the provision of section 26 of the Armed Forces Act or against an express Law made by the National assembly, will amount to nothing short of Forced Labour.

What does this mean?

This means that the only persons authorized by Law that can enforce compulsory labour, in line with Section 34(1)(c) and 34(2)(b) of the 1999 Constitution, on the Nigeria Army, to the effect that they should continue to work without voluntary retirement is the President of the Federal republic of Nigeria only, through a regulation in tandem with section 26 of the Armed Forces Act.

The National Assembly can also make a Law, suspending, restricting or stopping Voluntary retirement of Army personnel’s in Nigeria,  in pursuance of it’s powers in Section 4 of the 1999 Constitution of the Federal Republic of Nigeria (as amended).

Let it be known that an Army officer who voluntarily joined the military service without any duress or compulsion cannot be compelled to remain in the service against his wish, unless in accordance with extant provision of the Law as provided in section 26 of the Armed forces Act and Section 4 of the 1999 Constitution of the Federal Republic of Nigeria (as amended) in exercise of a Law enacted by the National Assembly.

I believe that, you cannot hide under the cloak of the law to derogate from the law. In as much as I understand that the action to suspend or stop Voluntary retirement is in order to peg the widespread application to resign, yet this is not enough ground to run afoul of the Law. Patriotism and Illegality are never birds of the same feather, one denigrates the other.

ALSO READ   Her Hijab and the Call-To-Bar: When the Hood Should Not Make the Priest! - Misbau Alamu Lateef

I therefore call on the top brass of the Nigeria Army to redirect itself to order, should in case it has misdirected itself in Law by issuing such memo; or peradventure it is currently mulling the idea of such Illegality.

Opatola Victor is an Abuja based Legal Practitioner.

Appraising Section 34 of the Arbitration and Conciliation Act and the...