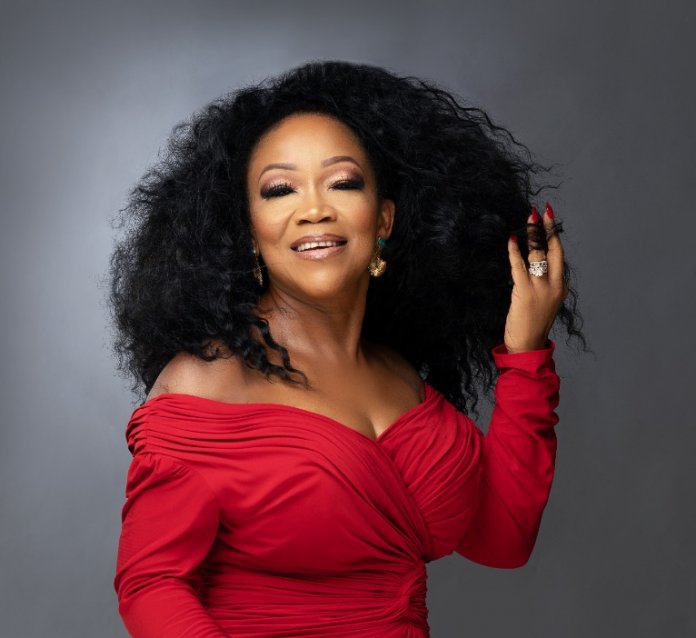 Either as Mfonobong or Mfonabasi, at birth, she came to life as a sign depicting the Goodness of The Most High. Her life has exemplified every bit of her name, Mfon (Goodness). For the six decades she has lived, she has carried on with every privilege the name brings. As a child, as a teenager, as a lady, as a wife, as a mother, as a leader and captain of industry and as a lawyer. Indeed, in whatever sphere of endeavour she is viewed, all that is seen is the Goodness of the Most High.

Admiring Aunt Mfon from afar, what you see is a woman with a lot of energy, a goal-getter, dogged, confident, daring, firm, yet polite and humble.

The first time I met this Amazon was in the darkness of the sit-out of a popular Lagos hospitality outfit. Right in that darkness, her beauty glowed up the environment. Throughout the conversation we had, I kept asking myself, if this woman is this beautiful at this age, I can imagine the number of heads she would have spinned in her younger years.

The popular saying is that “behind every successful man, there is a woman”, I dare say that the statement is wrong. The right statement is, “behind every successful man, there should be an Mfon”. This is true to the extent that it is not all women who stand behind a man that aids his success. However, you are guaranteed success as a man if you have an Mfon behind you.

Each time I see my Uncle with his wife, I bless God for his choice. He is a very lucky man to have Mfon as a better half. At every threshold of Uncle Paul’s life, Mfon has played a major role. Name it. The most recent, his election as the President of NBA and the successes he has achieved as the President of NBA. At every turn in these milestones, you see the print of Goodness.

As a lady, one thing that would leave an indelible impression in my mind is how Mfon has continued to stand with Uncle Paul in the criminal charge filed against him by the EFCC for not factchecking the source of the fee paid by his client. At some moments in court, you find Mfon sit on septic tank in the sun patiently waiting till the end of proceedings. At some points, you find her stand outside the courtroom through the better part of the proceedings. At some points she is quietly sitting alone at the back of the court watching her darling husband being persecuted, nay, prosecuted. One may consider these actions as normal duties expected of a dutiful wife. That may be correct. However, if considered with the level of success Mfon has achieved, one would agree that they are actions coming from the place of Goodness. I say this as a lady who understand the spirit of success.

I just mentioned success right, Mfon Ekong Usoro is very successful. Very very successful. She holds an LL.M in Maritime Laws from University College London, an LLB (Hons) from the University of Buckingham, B.L (Hons) from the Nigerian Law School and a BSc (Hons) Sociology from the University of Calabar. She is on leave of absence as the Managing Partner of Paul Usoro & Co., a leading law firm in Nigeria. She has extensive and current experience in trade in legal services, participation in negotiations at diplomatic meetings and achieving consensus for adoption of negotiated instruments amongst member States at the regional and continental levels.

Beyond her formal academic training and expertise, Mfon’s Regional, Continental and International experiences are unparalleled. She is the Secretary General of the Memorandum of Understanding on Port State Control for West and Central African Region (Abuja MoU) – an Inter-Governmental Organization operating under a Cooperative Agreement with the International Maritime Organization with full diplomatic status. The Abuja MoU comprises of 22 member States abutting the Atlantic from Mauritania to South Africa. As the Secretary General, Usoro established teams of experts from member States for the development of constitutive documents, port State Control procedures, takes the lead in negotiation and secures adoption of those documents by the member States and has successfully attained a high level of harmonization of procedures, implementation and coordination among the member States. She has held the position for over 8years.

ALSO READ   “You Have Inspired, Mentored and Given Hope to Many” - Ayi-Ekpenyong Imah Celebrates Mrs. Mfon Usoro @ 60

At various times Mfon has consulted for the African Union Commission. Working with a group of experts, she was pivotal to the drafting and negotiation of the African Union Maritime Transport Charter 2009. She is periodically invited by the African Union Commission Department of Infrastructure to participate in workshops/chair meetings held in Addis Ababa, Cairo etc. She is a member of the African Network for Women in Infrastructure (ANWIn), an African Union Commission initiative. Consulted for UNEP [Nairobi] and UICN [Senegal] to work with two other consultants from South Africa and Togo for the revitalization of the Convention for Co-operation in the Protection and Development of the Marine and Coastal Environment of the West and Central Africa Region [Abidjan Convention]. For several years, she was the sole Maritime legal consultant to the Maritime Organization for West and Central Africa (MOWCA), an inter-governmental body of countries in West and Central Africa headquartered in Cote d’ Ivoire.

Mfon Usoro was appointed in 2009 to chair the ministerial committee of the Maritime Organisation of West and Central Africa (MOWCA) regional Maritime Development Bank in 2009. For a period spanning over a decade, she regularly attends meetings of the Implementation of IMO Instrument Sub-committee of the MSC Committee of the International Maritime Organization in London and has been privileged to chair twice the IMO Workshop for Secretary General and Database Managers of Regional Port State Control regimes. She for more than a decade has been actively involved in discussions on liberalization of legal services including attending meetings at the WTO as a member of the International Bar Association Bar Issues Commission, International Trade in Legal Services. In 2012 contributed to “Adopting Regulatory Objectives for the Legal Profession” published by Professor Laurel S. Terry, The Dickinson School of Law, Pennsylvania State University, Pennsylvania, in the Fordham Law Review [Vol. 80].

Indeed, Aunt Mfon is an Amazon.