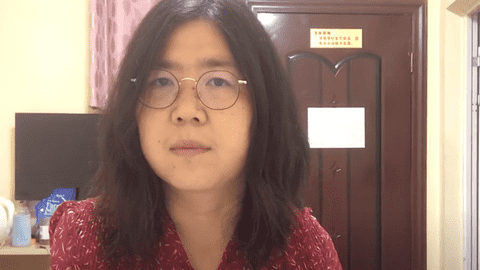 A Chinese court on Monday sentenced citizen journalist, Zhang Zhan, to four years in prison for her live stream reporting of COVID-19 breakout from Wuhan.

Zhan, who was detained in May, was convicted on charges of “picking quarrels and provoking trouble” in her coverage of the chaotic initial stages of the outbreak, the Hong Kong Free Press (HKFP) reported.

Dozens of her supporters and diplomats had gathered outside Shanghai Pudong New District People’s Court on Monday morning before the trial began, according to the report.

The police were compelled to push journalists and observers away from the court’s entrance.

The New York Times reported that the 37-year-old former lawyer has been on a hunger strike since June.

Her lawyers say that she has been forced-fed via a nasal tube as concerns grew about her health.

“She said she refuses to participate in the trial. She says it’s an insult,” Ren Quanniu, one of the lawyers, said after visiting Zhang in mid-December in Shanghai, where she is being held.

Ren, who visited separately later, pleaded with Zhang to eat, but she refused.

“She’s much paler than in her videos and photos, deathly pale,” Ren said, adding that Zhang appeared to have aged several decades.

“It’s really hard to believe that she’s the same person as you saw online,” the counsel further stressed.

The trial comes just weeks before an international team of World Health Organization experts are expected to arrive in China to investigate the origins of COVID-19. (ANI/NAN)