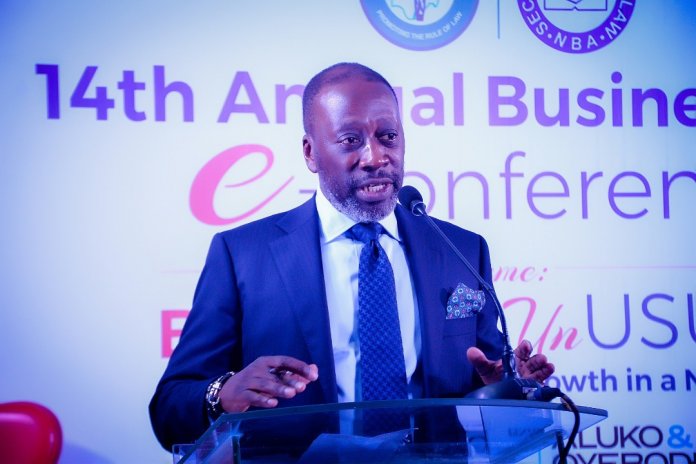 Several eminent guests at the recently held 14th annual Business Law Conference of the Nigerian Bar Association Section on Business Law (NBA-SBL) have commended the organisers for putting together a world-class e-conference.
There were over 3,500 delegates in attendance at the two-day e-Conference, which took place on Thursday, July 16th and Friday, July 17th.

In his opening remarks, the Chairman of NBA-SBL, Seni Adio, stated that the e-Conference was “a celebration of not giving up and overcoming, a symbol of resilience, adapting, dynamism, and teamwork, as well as the result of a labour of love, and an overriding commitment to stakeholders, including entrepreneurs, big business, commercial lawyers, and regulators.”

He further noted that the coronavirus pandemic has presented a circumstance of dynamism which NBA-SBL is known for, thus, this accounts for proceeding with the conference virtually.

NBA President, Usoro, commended NBA-SBL, describing the e-Conference as a landmark event and an appetiser towards the forthcoming NBA annual general conference. Besides, he noted that the virtual conference further brings to the fore the essentials of keeping to time and lauded the recent Supreme Court verdict as a step towards the digitisation of justice delivery in Nigeria.

On his part, Chief Justice Muhammad stated that the e-Conference is a statement alluding to the dynamism and resourcefulness of NBA-SBL. This is because, in his words, the NBA-SBL’s refusal to allow the scourge of the pandemic to hinder them was commendable.

Furthermore, CJN Muhammad described the theme of the e-Conference as “quite apt.” He also alluded to the recent verdict of the Supreme Court on the constitutionality of virtual court sittings as, indeed, a milestone. He, therefore, wished all the participants an “informative and truly inspiring session.”

Governor Sanwo-Olu of Lagos also lauded NBA-SBL for the giant stride approach in holding a robust e-Conference amidst the pandemic, while his Oyo counterpart, Makinde, extolled NBA-SBL for holding the milestone e-Conference, adding that “the event shows our resilience” to navigate in any time of emergency. He also praised the Supreme Court on its verdict on virtual court hearings, stating that his administration is set to put in place the digital architecture for virtual court sittings.

In his keynote address, Senator Cowan commended Adio’s leadership, whom he described as a friend. He also described the theme of the e-Conference as “apt because of the time we are in” and cited the United States as an example of one of the countries severely hit by the pandemic.

“The pandemic brings a lasting change to how we work and it is high time we embrace this reality, as the significance of this Internet of things era cannot be overstretched,” he said.

Cowan however recommended, amongst other things, the importance of cybersecurity and continued government approach to providing a regulation that promotes freedom of contract, workforce development, and a comprehensive approach for people to leverage on digital innovation.