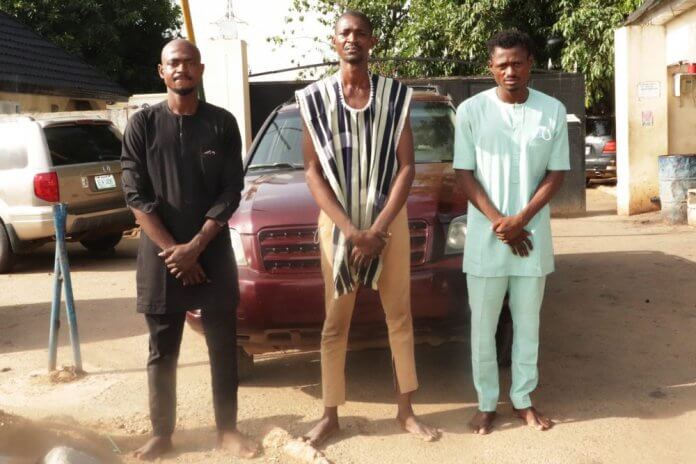 Mrs Janet Nnenna Ogbonnaya, a widow, was murdered on Thursday May 14, 2020 by three brothers. However, nemesis caught up with them: Johnson, Gideon, and Success. Since the Police operatives attached to the Intelligence Response Unit of the Nigeria Police Force arrested them, two of them have been singing like a canary!

“This thing happened on 14th of last month. I have known her for two years now. We have been dating. Anytime she comes to my house, she will always go back. So that day she came to my house and wanted to go back, and I did not want her to go. So I went and bought her sleeping medicine for her to sleep with me. I went to the pharmacy to buy the sleeping medicine. It was a powdery substance. I put it in a juice and she slept and did not wake up again. When she did not wake up, I then called my junior brother, Gideon, around 9.30 and 10. I told him I wanted to see him. He came and I told him and I told him that my friend died in my house. I explained everything to him. I suggested that I wanted to bury him in my backyard and he said no. He advised me to put her inside the car and dump her by the roadside.

“I did not agree. I was afraid people would see us and report us and it would be a murder case. That is how he helped me and we buried her in the soakaway in the compound.”

According to him, the last brother was not involved in what happened.

On why he called the woman’s family for ransome, he said, “I told my brother that I wanted to make it seem like she was kidnapped so nobody would suspect that it was me. That is why I called. I called and told them to pay ransome and after two days I broke my sim card and her own, so there would be no communication anymore.

“I knew that definitely they would trace the call, they may know I am the one that killed him. I called my brother and told him I was confused. I was afraid the police may trace her to my house and I sold the house for an auction price. My house is at Bakassi Market, Wumba, Apo. I thought by then nobody would suspect me but they would think it was kidnappers.

“When I put her SIM in her phone, one number called, but I don’t know the person. The person said his name was Mr Igwe and he was looking for the woman. I gave my brother the phone. My brother was afraid. I told him this is what we would do for us to get out of this mess. If we say it is kidnappers, they would not trace it to us. Since that day I did not call again and broke our sim cards.

“I met her on Facebook two years ago. I came to Abuja in 2018 and met her. Before then we were communicating on Facebook. And then we started the relationship. I drugged her because I wanted her to pass the night and go the next morning. I don’t know why I did that. I don’t know the name of the drug. I just asked for medicine to make someone sleep at the chemist. It was in a sachet. I am not a kidnapper. I only did that to take suspicion from me. I have never killed before. I am a welder by profession, but I also install CCTV,” he claimed.

“I am not happy that I had to cover his sin. I asked him why must it be me that you call? I told him to take the lady out maybe tomorrow morning, people would be able to identify her. He argued with me that very night. He said he wanted to put the lady in the soakaway at the backyard. When I came there he had opened the soakaway already and I ran out. Since that day I never went back to the house again, until when we went with the police to get the corpse on Thursday.

“I did not go to the police immediately and that is a mistake I did. I was doing it because he is my blood brother and I would not be the one to call the police for him. I told him not to involve me. It was not until I was arrested that I told the police what happened,” Gideon said.