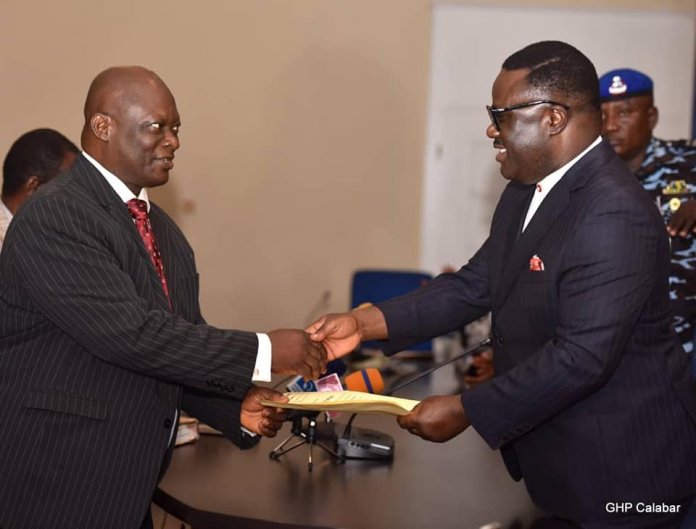 The Acting Chief Judge of Cross River State, Justice Maurice Eneji, has been given a tenure extension for another three months to continue in acting capacity amidst controversy.

The letter conveying the tenure extension was written by the Chief Judge of Nigeria, Justice Dr. I.T. Muhammed to the Governor of Cross River State, Sen. Ben Ayade, dated May 29, 2020.

The first tenure of Justice Eneji as the Acting Chief Judge of Cross River State had ended on June 2, 2020, following which the NJC wrote to the state governor to reaffirm their earlier position that Justice Akon Ikpeme, who was denied confirmation by the state’s legislature, be represented to the House of Assembly for confirmation as the substantive Chief Judge of Cross River State.

Governor Ayade, in a letter dated May 29, 2020, obeyed the directives of the NJC and wrote to the state legislature demanding the confirmation of Justice Ikpeme as directed by the NJC.

The House of Assembly on June 2, 2020, the day of the expiration of the first tenure of Justice Eneji in acting capacity, considered the request of the NJC through a letter from the governor.

The lawmakers rejected the request to confirm Ikpeme, saying that they cannot reverse themselves after rejecting her earlier.

“There is no new information. Besides, if the NJC cannot reverse themselves, we too cannot reverse ourselves,” Fred Osim, one of the legislators said while supporting the motion to reject the confirmation of Justice Ikpeme.

The rejection of Justice Ikpeme by the House of Assembly for the second time has thrown stakeholders in the state into confusion since Ikpeme remains the most senior judge in Cross River State while Eneji, the second most senior, did not get tenure extension through the decision of the NJC.

However, after the second rejection of Ikpeme by the legislature, by the early morning of June 3, 2020, a released signed by the Special Adviser Media and Publicity to Governor Ben Ayade, Christian Ita, surfaced and made reference to a letter from the Chief Judge of Nigeria and the Chairman of NJC wherein he (the CJN) “approved the extension of the appointment of Justice Maurice Eneji as the Acting Chief Judge of Cross River State by another three months.”

“It stated that the extension of Justice Eneji’s appointment shall take effect from June 3, 2020 and end on September 2, 2020 in accordance with the provisions of Section 217(5) of the constitution of the Federal Republic of Nigeria 1999 as amended.

“Consequently, His Excellency the Governor, Sir Ben Ayade, has approved the extension of the appointment of Justice Eneji as the state Acting Chief Judge by three months.”

Many questions are being asked since then. “Can the Chief Judge of Nigeria sit alone and rescind the NJC decision earlier given for the most senior Judge to become substantive Chief Judge?” Why did the Governor present the NJC request to the legislature for the confirmation of Ikpeme if he indeed had the letter from the CJN? Did the NJC meet again to empower the CJN to approve the tenure extension for Eneji?|

Giving his views on the probing questions, Chief Mba Ukweni, SAN, said it would be sad and unfortunate for the Judiciary in Cross River State and indeed Nigeria, if the NJC allows the politicians to manipulate their decisions against constitutional provisions.

“I still doubt that the letter came from the CJN. But if it is indeed so, that the CJN wrote the letter, I will feel very embarrassed because it means the Chief Justice of Nigeria  is condoning illegality in the Cross River State judiciary and panning the wishes of a politician.”

Another senior lawyer of over 25 years in practice, Chief Utum Eteng Esq, also expressed dismay at the crisis as to who should be the Chief Judge of Cross River State in a substantive capacity.

His words: “The provisions are clear and we all know who should be. We know it should be Justice Ikpeme who is the most senior judge but the politicians are playing their game and trying to create the crisis and manipulate the state Judiciary.

“They want Eneji who is the second in seniority. But as far as the provisions of the constitution are concerned, Eneji will not be the substantive Chief Judge in the state. He can only continue in an acting capacity but won’t be a substantive CJ.”