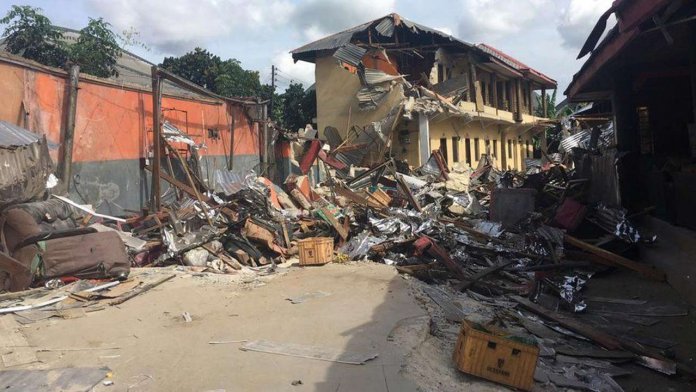 A magistrates’ court in Port Harcourt has convicted and fined the owner and manager of demolished Prodest Hotel in Eleme, Gogorobari Needam and Bariledum Azoroh N50,000 for contravening the State Executive Order on COVID-19.

Although Needam was not present in court, the court ordered that Azoroh should be quarantined at the isolation centre in Yakubu Gowon Stadium, Elekahia for 14 days to ascertain his coronavirus status.

Before his sentence, Azoroh had insisted on seeing his counsel, Godwin Awi, who was absence in court due to his inability to get a pass that allowed access the court due to continued lockdown of Port Harcourt and Obio-Akpor council areas.

He lamented that in spite of the plea by his client to get his counsel to defend him, the court went ahead to convict him, adding, “With what has happened, it is clear that there are other underlying issues that probably we do not know.

“I do not agree with everything that has transpired today in line with the fact that the Constitution is clear as to the issue of right to counsel, adequate time and facility for an accused person standing trial to defend himself.”

Meanwhile, Deputy Governor of Rivers State, Mrs. Ipalibo Harry Banigo has dismissed insinuations that Governor Wike was sidelining her in the fight against COVID-19 and implementation of other state government’s programmes and policies.

Banigo, a public health expert, said the statement from the Centre for Public Trust (CPT) in which it asked Governor Wike to stop sidelining her was done in bad faith.

In a statement issued by her spokesperson, Owupele Benebo, the deputy governor said she would have ignored the group, but that it was important to set the records straight so that Rivers people and the larger society would not be made to believe the falsehood that Wike had relegated her to the background.