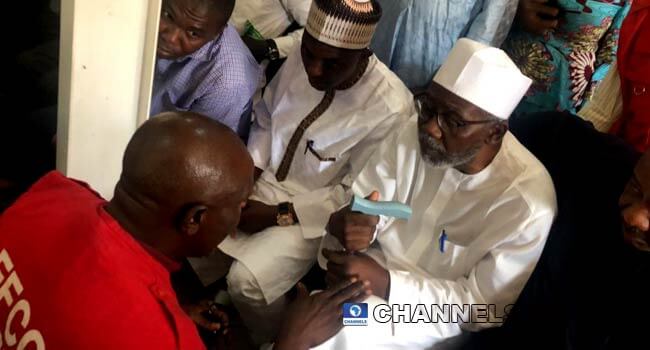 A High Court of the Federal Capital Territory (FCT) in Gwagwalada has fixed Thursday for the arraignment of a former Minister of Justice and Attorney General of the Federation (AGF), Mohammed Adoke (SAN) and six others.

Justice Abubakar Kutigi told parties to return by 2pm on January 23, 2020 for arraignment, when it became obvious on Wednesday that not all the defendants have been served with copies of the 42-count charge brought against them by Economic and Financial Crimes Commission (EFCC).

They are charged with fraud in the handling of the settlement agreement on the Malabu Oil deal effected under President Goodluck Jonathan’s administration.

All the defendants (three human being and four companies) were present at the proceedings that began around 2.30pm on Wednesday.

Adoke, dressed in all white, looked frail and old.

All the defendants were represented by lawyers (who were all Senior Advocate), except the fourth defendant (Nigeria Agip Exploration Company), whose representative said the company’s lawyer was not aware that the case was scheduled for 2 pm on Wednesday.

The judge ordered the prosecution to ensure that all the defendants were served today and that all necessary applications for bail were also filed preparatory to Thursday’s proceedings.