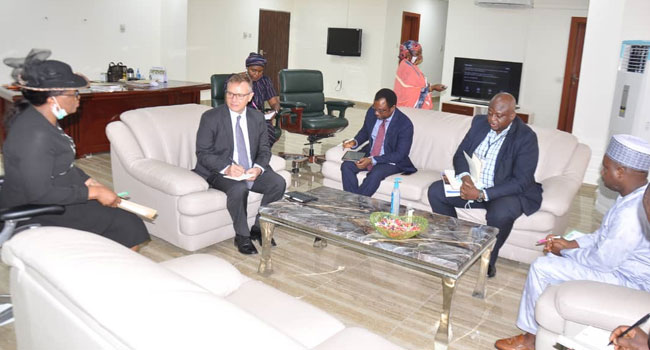 The Acting President of the Court of Appeal, Hon. Justice Monica Dongban-Mensem has called on the International Foundation for Electoral Systems (IFES) to work out modalities for early and pragmatic training of Justices and Judges on the usage of the Manual for Election Petition Tribunal (EPT) as a way of broadening their scope of understanding its application.

She said: “I would like IFES to consider having more regular workshops for Justices and not just when elections are around the corner. This will also allow for proper feedback on how well people appreciate this effort and how your organisation intends to implement the issues raised to ensure that the process is better executed for positive result”.

Justice Dongban-Mensem made the plea when the Country Director of IFES, Mr Hermann Thiel, led the Deputy Country Director, Seray Jah and the Project Manager, Mr Simon Fanto to brief her on plans being made to convene a debriefing conference of the Justices and Judges who participated in the 2019 Election Petition Tribunal Processes as well as review the Manual for Election Petition Tribunal (EPT).

The IFES Country Director, Mr Hermann Thiel disclosed that their visit was of dual-purpose, first to familiarise himself with the new Acting President of the Court of Appeal and intimate her on the organisation’s activities.

The second purpose was to chart a new beginning on the way forward on how to overcome the challenges the COVID-19 poses in bringing back the 250 Judges drawn from the 36 states of the Federation, who participated in EPT for a debriefing conference especially, with the Federal Government’s guidelines on social distancing, which bans movement and official gatherings in the country.

In their contributions, the IFES Project Manager, Mr Simon Fanto and the Deputy Country Director, Mr. Seray Jah informed Justice Dongbam-Mensah that apart from training judges, IFES also collates feedback from the judges which helps in the review of the manual for election petition tribunals.

“As a tradition, at the end of the tribunal sittings, the post-election conference takes place where all the Judges come together to share experiences on what had happened while in the field, with a view to understanding the best processes that assisted them and those that posed challenges” Mr Fanto reiterated.

Specifically, the Project Manager informed the Acting President that the fall-out from such interface formed the bases for future reforms.

“Now that there are a lot of reforms that are ongoing, especially at the National Assembly as well as the legal components, we are primarily here to discuss and seek your Lordship’s guidance on how to reconvene the Post-Election Petition Tribunal Conference, review the recommendations from the discussions; this will trickle down to the production of the 2023 fourth edition of the Manual.”

“We also would like to brainstorm on what strategies to evolve, considering the realities on ground, because IFES brings all the Judges together-about 250 in number for the debriefing Workshop/Review, but the realities on ground may not permit that to happen. So, we are suggesting the use of ICT tools as the key strategy on the way forward the Deputy Country Director added.”

On the way forward, while commending IFES for a job well done in partnering with the Court of Appeal, the Acting President, observed that although it is a difficult period now necessitating thinking out of the box, on how things can be done differently, to achieve same results irrespective of the pandemic while leveraging on ICT tools to reach out to these Justices and Judges, suggested a decentralisation of the project to the six geopolitical zones of the country.

For emphasis, Justice Dongban-Mensem noted that enormous documents are presented before these Judges during the tribunal sittings, saddling them with a lot of paperwork which according to her is not a good time for the manual to be given to them.”

She suggested that if these manuals are made available ahead of time for the Judges to study and, follow-up workshops are organised specifically to address issues to be raised by the 250 Judges who participated in the Election Petition Tribunal, it will ease the tension being faced due to insufficient time for the study and assimilation of the guidelines, as contained in the Manual.

Justice Dongban-Mensem remarked that the idea whereby a lot of documents were dumped on Judges, who were expected to go through such materials without proper guidance, did not augur well for smooth justice delivery and urged IFES to take a closer look and find ways to address the issue.
“In our rules, we say that briefs should not be more than a certain number of pages; yet they will reduce the font size of such briefs, compressing 60 pages to 30 pages, thereby putting excess pressure on our eyes.

“In planning the next edition of the manual, I think the Senior Advocates of Nigeria and lawyers should be involved because their roles are crucial in such decision-making process,” the Acting President suggested.

Highlighting the point raised by the Acting President, the Chief Registrar, Mr Ibrahim Aliyu recalled that in 2015, IFES had seminars and interactions with the tribunal Judges where they shared their experiences in the field.

He said through the feedback, updating the manual will give first-hand information to the tribunal Judges for improved adjudication on electoral matters.