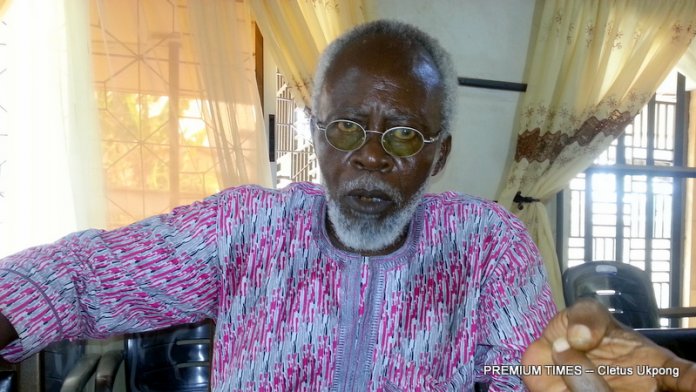 The National Industrial Court in Uyo, Akwa Ibom State, on Thursday, ordered the University of Uyo to reinstate a lecturer, Inih Ebong, unjustly sacked from the university in 2002.

Mr Ebong was an associate professor in the department of theatre arts when his appointment was unlawfully terminated. Akpan Ekpo and Peter Effiong were the vice-chancellor and registrar respectively at that time.

Mr Ebong, before his sack, had a running battle with Messrs Ekpo and Effiong who saw him as a thorn in their side for speaking up regularly against alleged maladministration in the school.

The lecturer once rejected the university almanac and sent it back to the school with a note that the faces on it were not deserving of his sitting-room since, as he claimed, they were the very persons who were victimising him.

For about 18 years, Mr Ebong went through several courtrooms in Nigeria, hired several lawyers and appeared before different judges, seeking justice against Messrs Ekpo and Effiong, and the University of Uyo.

“The stoppage of the Claimant’s salary, the indefinite suspension of him from duties, and the purported termination of his appointment by the Defendants without due process were malicious, ultra vires, and unlawful, and therefore null, void and of no effect whatsoever,” Justice M. A. Namtari declared in his judgment in the case instituted by Mr Ebong in 2017 at the industrial court.

The court, accordingly, ordered the University of Uyo to withdraw the termination letter, reinstate Mr Ebong, and pay all his salaries, allowances, and entitlements that would have accrued to him since August 1, 2001, when his salary was stopped, and from March 28, 2002, when his appointment was wrongfully and unlawfully terminated.

The court also ordered the university to pay Mr Ebong the equivalent of his full annual salaries and allowances for the 2001/2002, 2007/2008, and 2014/2015 academic years the lecturer should have gone on sabbatical leave in accordance with the terms and conditions of his employment if his appointment had not been unlawfully suspended and later terminated.

The university, in addition, is to pay Mr Ebong N10 million as damages, the court ordered.

All the orders, the court said, must be complied with within 30 days.

“Justice has been done at long last, the lesson to be learnt from here is that wickedness does not pay. The wicked only builds up a fortune for his victim,” Mr Ebong told PREMIUM TIMES when the newspaper sought his reaction to the judgment.

It is unclear for now if the university is going to appeal the court judgment or not.

“I will get back to you,” the university spokesperson, Blossom Okorie, said when PREMIUM TIMES contacted her on Wednesday.

Mr Ebong’s legal victory is coming about two years after another University of Uyo lecturer, Edet Akpan, won a similar battle and was reinstated 14 years after he was also unjustly sacked from the school.

Mr Akpan was the chairman of the Academic Staff Union of Universities (ASUU) in the school before the then vice-chancellor, Mr Ekpo, terminated his teaching appointment for criticising his (Ekpo) leadership style.

Mr Akpan, an associate professor of mathematics, was sacked from the school in 2004.

The travails of the union leader coincided with the period in which the National Universities Commission (NUC) withdrew accreditation for several courses in Uniuyo, including courses in the faculty of social sciences where the then vice-chancellor, Mr. Ekpo, came from; a development that the federal court took notice of while delivering judgment in the suit challenging the termination of Mr. Akpan’s appointment.

“Let me further observe here and hold that what the defendants termed insubordination and misconduct are constructive criticism of an inept administration that finished last in the accreditation exercise in all the universities in Nigeria,” Justice E.S Chukwu of the federal high court, Uyo, said in his judgment in 2013.

While ordering the university to reinstate Mr Akpan, Justice Chukwu noted that the university had become “a place where the truth will always be punished senselessly”.

The judge continued: “If there is any person that his appointment should be terminated, it is the Vice-Chancellor; and his kangaroo panel (that) should be shown their way out.

“If they had honour, they ought to have resigned and not witch-hunt innocent citizens like the plaintiff whose association (ASUU) cried foul or complained of gross incompetence in the university administration.”

The court also ordered the university to pay Mr Akpan his emoluments for all the years he was kicked out of his job and N500, 000 to cover the cost of litigation.

After his tenure as vice-chancellor, Mr Ekpo moved on to become the director-general, West African Institute for Financial and Economic Management, Lagos.