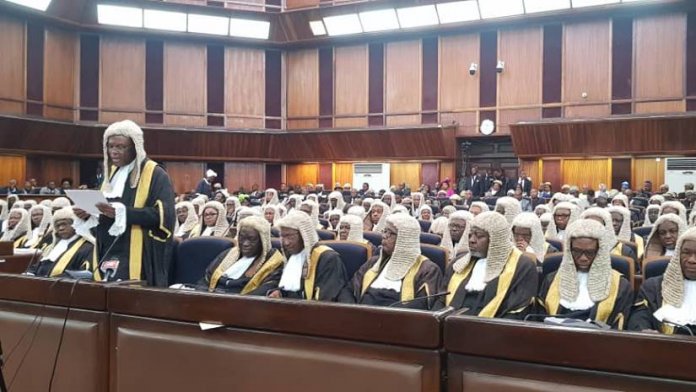 A group of Senior Advocates of Nigeria (SAN), under the aegis of Justice Reform Project, have proposed amongst many other things that the 2020 annual court vacation be either suspended or reduced to a week in view of the time that would be lost during the restriction of movement imposed by the Federal Government in a bid to curb the spread of the coronavirus pandemic.

The group made the above suggestion in a letter captioned COVID 19: ADMINISTRATION OF JUSTICE AND WELFARE OF LAWYERS and addressed to the President of the Nigerian Bar Association (NBA), and the Chairman of the Body of Benchers.

The two issues addressed by the letter are the Administration of Courts & Justice and Welfare of lawyers.

On the issue of the administration of courts and justice the group advocated the use of technology to facilitate continuity of court business. Mechanisms to hear  by telephone conference calls extremely urgent matters during extreme restrictions. measures to put in place a Practice Direction that this period will be discarded in computing time under the Rules of Court will dispense with filing of motions for extension of time, avoiding a further clog on an already congested court system. The method of application in individual cases remains a matter for each Judge being in control of the court’s proceedings. Suspension or reduction of period for the annual court vacation and sanitization of the court and its surroundings

On the welfare of lawyers, the JRP suggested

(a) With restriction on movement occasioned by the lockdown, there are many of our colleagues who may be unable to meet their daily needs and those of their families. It is recommended that BOSAN in collaboration with the NBA attempt to mitigate the impact on the most vulnerable and exposed amongst us. We have for this purpose singled out a category of lawyers; practitioners who are four (4) years post call and below, having an annual turnover of ₦1,000,000.00 (One Million Naira) and below.

(b) To achieve this, we propose the following:

(i) The NBA should show its commitment to the cause by setting aside a specific sum for this purpose (the “Fund”). As an off-the-cuff suggestion, a sum of no less than ₦50,000,000.00 (Fifty Million Naira) may be set as a threshold. The NBA may seek to obtain a loan against future practicing fees in the face of liquidity challenges.

(ii) BOSAN may consider deploying some of its leadership fund to ameliorate the condition of some of the aforementioned group of young lawyers in support of this Fund as set up by the Nigerian Bar Association (NBA).

(iii) Lawyers who are better placed at this time may contribute to this Fund such reasonable amounts as may be convenient for them.

(iv) Senior Advocates and other senior lawyers may commit themselves to contributing a minimum sum of ₦ 250,000.00 (Two Hundred and Fifty Thousand Naira) to this Fund.

(v) The NBA and BOSAN will negotiate with the relevant tax authorities to ensure the contributions shall be a tax-deductible item for the current year’s annual tax obligation. In effect, donations are somewhat subsidized and repayable to this group of lawyers in form of tax rebate for the year under consideration. It is likely that the Federal Government will be willing to accommodate this gesture having regard to its current disposition and welfare package to other sectors of the economy.

(vi) The NBA should then disburse an agreed sum to the group of young lawyers. Again, by way of suggestion it may be any sum between ₦20,000 and ₦50,000 a month for an initially determined period. In view of the uncertainty of the end of the pandemic, we suggest an initial period of six (6) months.

(vii) To qualify, this group of young lawyers shall show evidence of their annual turnover in form of any one of their balance sheets, statements of account, or such reasonable representation of cash flow.

(viii) The local NBA Branches should create a list of the group of young lawyers.

The suggestions proposed above as it relates to the administration of the courts and justice, and the welfare of lawyers are not entirely novel. The Supreme Court of India heard cases with the aid of teleconferencing. The Judges made use of an application named “Vidyo” to hear matters, with counsel on both sides calling in from their homes/offices, and the proceedings successfully went on. In the same country, the Bar Council of Delhi has made financial provisions to the equivalent of ₦25,000.00 (Twenty-Five Thousand Naira) to its most vulnerable members to ensure that the daily needs of those members are met.
We therefore urge you to use your good office to ensure that the due and proper administration of justice does not grind to a halt at this time, and that we demonstrate sympathy for the welfare of our financially weakest members.

A copy of the letter is herewith attached.