Home News Did GTB Say It Does Not Obey Order Made by Magistrate Court?

A Facebook User Aderoju Teslim Ajose shared on his wall an order made by a magistrate court and an email response from Guaranty Trust Bank indicating that the Bank only obeys orders made by High Court and wrote:

REGIME OF DISOBEDIENCE OF COURT ORDER
I received this two piece from a colleague, a magistrate court Holden at Ebute metta Lagos gave an order directing GTB to reverse an erroneous transfer of money made by the Applicant, having presented the order. GTB responded that they only receive court order of the High Court and not of the magistrate court.
This is a total disobedience to court order, it is unbelievable from such financial institution.

The Order and email below 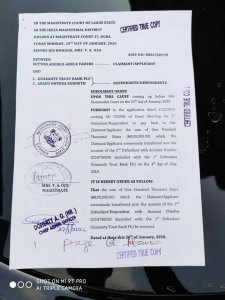 NULAI Justice Education Fellowship – A Call for Application from Law...