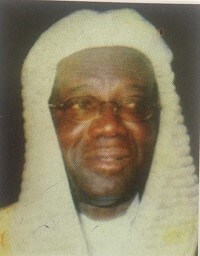 The death has been announced of a member of the Body of Senior Advocates of Nigeria (BOSAN) and former Director General of the Nigerian Law School, Dr. Koleade A. Abayomi SAN, OON.

The above information is contained in a press statement issued by the secretary of BOSAN Seyi Sowemimo SAN.

“The BOSAN Secretariat wishes to announce the death of Dr. Koleade A. Abayomi SAN, OON, who died in the early hours of today, 2nd of April, 2020 in London.

We deeply mourn the sad loss of our departed colleague and pray that the Almighty God grant his family the fortitude to bear the loss.

Dr. Koleade Abayomi SAN was born on the 20th of August, 1940 (79+ years old), called to the Nigerian Bar in 1966, admitted to the Inner Bar in 2005 . He taught at the Nigerian Law School and rose to the position of Director General. He retired in 2005 and went into private practice and consultancy in Lagos until his death .
He’s survived by his wife, children and great grandchildren.
Further information will be communicated in due course .

May the soul of Dr. Koleade Abayomi SAN and the souls of other faithful departed rest in peace. Amen”

Late Emeka Eze was Abandoned by NBA when He Needed Help...