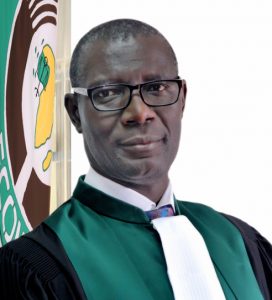 The President of the Community Court of Justice, ECOWAS, Justice Edward Amoako Asante has been elevated to Ghana’s Court of Appeal at a ceremony held in the Jubilee house, the seat of the country’s presidency on Friday, 7th August 2020.

The elevation comes less than a month after the President was re-elected for a second term of two years by his peers on 15th July 2020.

Justice Asante was among six justices of the court, comprising four men and two women, who were sworn in at the ceremony by President Nana Addo Akufo-Addo who described them as not only eminently fit and qualified but also possessed the impartiality of mind and independence of spirit for the exalted office.

The President used the opportunity to remind the new Justices that the country’s growth was dependent on a “Judiciary that commands the respect of the people by the quality of its delivery of justice, as well as by the comportment of its judges.”

Consequently, he stressed the importance of judges who are honest, possess integrity and a sound knowledge of the law noting that a situation, where judges proffer judgments on the basis of decisions from lower courts and cite them as law, is not acceptable, and even less so, when judges cite no authority at all for their rulings, and give orders without reasons.

“You must be learned, know your case law and ensure your decisions and judgments are properly motivated in accordance with the principle of stare decisis, the doctrine of precedent, which has been the bedrock for the evolution of the common law,’ the President added.

In order to assist the judges, the President said the Government has, since his assumption of office, introduced a number of policy measures to help bridge the technology-gap so that they could harness the power of technology to advance the rule of law as this is critical in the modern era, adding that if the government was to maintain the confidence of the Ghanaian people, it was important to shore up our nation’s reputation as a country governed in accordance with the rule of law.

He added that this explains why the government launched the e-justice system, last year in order to leverage technology in the delivery of justice and urged the judges to take full advantage of the e-justice system, to expedite the conduct of cases that come before them and in the management of the Court.

He reminded the judges that they were taking high judicial office at an exceptional moment in human history with the coronavirus pandemic, that is sweeping across the globe and wreaked havoc on the lives and livelihoods of peoples all over the world, including our own here in Ghana.

Nonetheless, he said that the institutions of state must in spite of the pandemic provide the requisite leadership to steer the population through the crisis taking cognisance of the age old adage that ‘justice delayed is justice denied.”