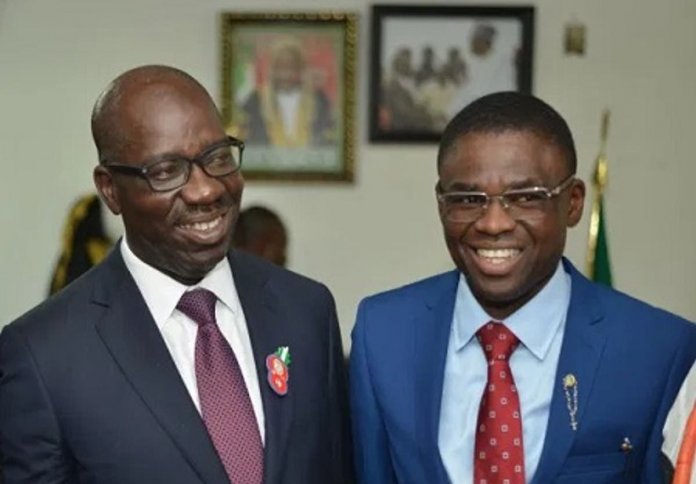 Foremost lawyer and Senior Advocate of Nigeria (SAN), Chief Wole Olanipekun, is leading four other SANs in cases of certificate forgery and perjury instituted against Governor Godwin Obaseki of Edo State and his deputy, Philip Shaibu, at a Federal High Court in Benin City. The All Progressives Congress (APC) and a member of the party, Mr. Edobor Williams, instituted the cases.

The plaintiffs are asking the court to disqualify the governor and his deputy from participating in the September 19 governorship election in the state as well as prevent their party, the Peoples Democratic Party (PDP), from fielding any candidates in the election.

In a related development, the APC National Campaign Council for the September 19 governorship election in the state, Saturday, raised the alarm over the destruction and removal of the outdoor billboards and campaign posters of its candidate, Pastor Osagie Ize-Iyamu, and his running mate, Mallam Gani Audu, by alleged agents of the state government.

But Special Adviser to Obaseki on Media and Communication Strategy, Mr. Crusoe Osagie, dismissed the allegation, calling it belated antics of a routinely recycled politician.

Meanwhile, the Independent National Electoral Commission (INEC) has released a final list of eligible candidates for the September 19 election across the different political parties.

Obaseki and Shaibu, who are contesting the election on the platform of PDP, had contested and won the governorship election in 2016 under APC. In two separate suits filed against them by the APC and Williams, the plaintiffs want the court to stop Obaseki and Shaibu from participating in the September 19 governorship election in Edo State for allegedly lying on oath and submitting false documents to INEC to aid their qualifications in the forthcoming election. According to them, the alleged offences of the defendants run contrary to the provisions of the Electoral Act 2010, as amended, and the punishment is automatic disqualification.

The plaintiffs are also asking the court to bar the PDP from participating or representing itself in the September 19 governorship election for sponsoring ineligible candidates.

In the first suit marked FHC/B/CS/74/2020, which has Obaseki, PDP and INEC as first, second and third respondents, respectively, the plaintiffs want the court to hold that Obaseki lied on oath in his INEC Form CF 001 submitted in aid of his qualification.

The plaintiffs further accused the first defendant of forging his West African Examinations Council (WAEC) result in aid of his admission for a Bachelor of Arts degree at the University of Ibadan. In a statement of claim in support of the suit by Dr. Ehiogie West-Idahosa, the plaintiffs further claimed that Obaseki did not meet the minimum requirements to gain admission into the university, as he had just three credits and two passes in his school certificate results purportedly issued by WAEC.

The plaintiffs in the suit added that Obaseki had also been disqualified from participating in the election by the APC screening committee, which discovered huge discrepancies in documents presented in support of his academic qualifications.

The plaintiffs, in accusing Obaseki of forgery, pointed out that his degree certificate, whose photocopy was presented to INEC, revealed that only the Vice Chancellor of the university signed the certificate and without effective date of award, as against the standard operating procedure of the Examination, Records and Administrative Data Processing Division.

The plaintiffs also want the court to declare that Obaseki’s claim that he worked with Afrinvest Limited from 1994 to 2014, when he retired, was false.

Aside the alleged falsification of documents and lying on oath, the plaintiffs want the PDP standard bearers disqualified on the grounds that the waiver granted them by the PDP last month contravened section 177 of the 1999 Constitution.

In the other suit marked FHC/B/CS/75/2020, which has Shaibu, PDP and INEC as first, second and third respondents, respectively, the plaintiffs, apart from accusing Shaibu of also parading false academic documents, want him disqualified for presenting forged tax clearance certificate to INEC in 2006 in aid of his qualification for the 2007 House of Assembly election in Edo State in 2007.
On Shaibu’s academic record, the plaintiffs claimed discrepancies and alleged forgery in his WAEC result, adding that Shaibu’s claim that he obtained a Master of Business Administration (MBA) from the University of Benin in 2012 was false.

Meanwhile, the APC campaign council, which accused Edo State government agents of destroying and removing the billboards of its candidates, said it had petitioned the Commissioner of Police, Mr. Johnson Kokumo, and INEC regarding what it called a “criminal act”. It said the billboards and campaign posters were located at strategic points in Benin City and beyond.

National Vice Chairman of the publicity committee of the campaign council, Hon. Patrick Obahiagbon, said at a press conference in Benin City, the Edo State capital, that the action was “unfortunate” and “criminal.” Obahiagbon stated that the “outdoor billboards and indeed other campaign materials were duly paid for, designed and erected in full compliance with all legal requirements.”

He said, “We are convinced that this act of intolerance, carried out with impunity, foreshadows what the Edo State government has in store for the Edo voters and our supporters in the September 19 election following the emergence of incontrovertible facts that Mr. Godwin Obaseki is on his way to an embarrassing defeat.

“This unfortunate and criminal action took flight on Thursday, the 16th of July, 2020, when the Edo State government allegedly expressly told one Mr. Dave Giwa Amu who is parading himself as the Managing Director of the Edo State Signage and Advertising Agency, to commence immediate removal and destruction of our billboards.”
The campaign council also stated, “The Edo State Signage and Advertising Agency, purportedly led by the so-called Mr. Dave Giwa Amu, an avowed supporter of the incumbent Governor Godwin Obaseki, is an agency that is yet to receive the assent of the Edo State House of Assembly as the bill for its creation and operations is still being considered in the legislative chamber…

“This agency, as of today, is unknown to the laws of Edo State and is being weaponised by the state government, an interested party in the election, to give itself an illegal, unfair, unethical, fraudulent advantage as we approach the polls.

“This is an egregious and opprobrious escalation of other recorded acts of abuse of office and disregard for the law on the part of the Edo State government. It is a new low for a state government and a governor that has blurred and corrosively dimmed the lines on what is personal and official, reserves the interest of the state and that of the parochial interests of the man, who lead it.

“It is unfortunate that as the chief executive of the state, who is expected to commit to peace, rule of law and avoidance of rancour, Governor Godwin Obaseki has continued to heat up the polity with reckless and provocative comments, media blackmail and criminal actions of intolerance, including the mass destruction of opponent’s campaign materials.”

Obahiagbon stated that APC and its candidates remained confident that Edo people already knew where to place their thumbs on September 19 and would not be cowed by the “last kicks of a dying horse”.

The campaign council said, “We will, nonetheless, stop at nothing to ensure that the rule of law prevails in the state and that the governor is made to come to terms with the fact that all constitutional powers have limits and responsibilities and that as it has been said by scholars, nobility commands responsibility.”

But in a swift reaction, Osagie insisted that the Edo State government did not bring down APC candidates’ campaign billboards. In a statement, he said the allegations were ludicrous and unfounded.

He alleged in the statement, “Anyone who knows Ize-Iyamu very well knows that this is his approach to politics. He raises the alarm and cries wolf, when no one is chasing him. The state government has not removed any of his billboards. This is cheap blackmail to score lame political points.

“Ize-Iyamu is a politician that assumes relevance during every election cycle. This is what he does for a living and has no other job. It is not surprising to see these statements from him and his team. He should not be taken seriously, and his statements should be disregarded.

“He would go back to his cocoon after he has been defeated at the September 19, 2020 election and would most likely resurface after four years to repeat this cycle. So, we are used to his childish charades.”

INEC, in compliance with its Timetable and Schedule of Activities, and in accordance with Section 34 of the Electoral Act 2010 (as amended), published the final list of candidates for the 2020 governorship election in Edo State by displaying it in the commission’s offices in the state capital and the 18 local government areas of the state. The list was also uploaded on the commission’s website.

By Section 35 of the Electoral Act and the Timetable and Schedule of Activities of the Commission, withdrawal and substitution of candidates for the Edo Sate governorship election ended on July 13, 2020.

A statement by INEC’s National Commissioner and Chairman, Information and Voter Education Committee, Festus Okoye, listed the governorship candidates and their deputies as follows:

Okoye said with the publication of the final list of candidates, no political party could withdraw or substitute any of the nominated candidates or tamper with the list and particulars of the candidates in a manner inconsistent with the intendment of the Constitution and the Electoral Act.

“We urge political parties to pay close attention to the timelines stipulated in the Timetable and Schedule of Activities of the Commission as well as the provisions of the Constitution and the Electoral Act,” Okoye said.

Justice Ofili-Ajumogobia Lied to EFCC, She was not Admitted – Doctor