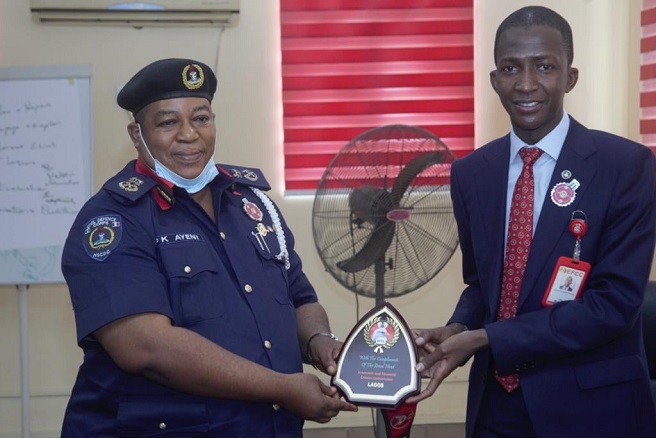 The Lagos Zonal Office of the Economic and Financial Crimes Commission, EFCC, has expressed its readiness to work with the Nigerian Security and Civil Defence Corps, NSCDC, Lagos Command, to tackle the menace of illegal dealing in petroleum products and pipelines vandalism in the zone.

The Head, EFCC Lagos Zonal office, Abdulrasheed Bawa, made the declaration on Thursday, December 10, 2020 when the Commandant, NSCDC, Lagos Command, Ayeni Paul, led officials of the agency on a courtesy visit to the Lagos Office of EFCC.

Bawa, who lauded the existing robust relationship between the Commission and the NSCDC, decried the activities of the vandals, saying every hand must be on deck to protect our infrastructure.

According to him, “One area in which we have a shared mandate is in this issue of vandalism, partly because the EFCC, by Law, is empowered to enforce the Miscellaneous Offences Act 1983- that is where offences bordering on issues of vandalism and illegal dealing in petroleum products come to be.

“We need to protect our infrastructure; and one of the key things we need to do in relation to pipeline vandalism is the fact that those who cross the line are punished for it.

“Your reach is much more than that of the EFCC, but I assure you that whosoever you arrest, you can hand him over to us. If there is a case, we will develop it, as we have a very robust legal department that will assist us to file charges appropriately and ensure that justice is done”.

The Lagos Zonal Head of EFCC also used the occasion to express his gratitude to the NSCDC for continuously assisting in provision of security to the assets recovered by EFCC across the federation.

“We cannot thank you enough for that,” he said, adding that “Every citizen of this country has a responsibility to key in and ensure that the cancer of corruption is reduced, at least to the barest level in this country.

Responding to a request by the NSCDC Lagos Commandant with regard to capacity development, Bawa assured that the Lagos Zonal office of the Commission would organize a training, for select officers of the NSCDC on the activities of the Commission and elements of vices of corruption, among others.

“We are going to work out how best we can organize the training for your officers, as requested,” he said.

Earlier, the Commandant, NSCDC , Lagos Command had reiterated the need to sustain the onslaught against perpetrators of corruption and economic and financial crimes, saying “The NSCDC cannot do without working hand-in-hand with the EFCC in Lagos in particular and Nigeria in general.”

He further requested the Commission to train some officers of the agency “in order to, at least, gear them up and give them more knowledge of what you are doing here.