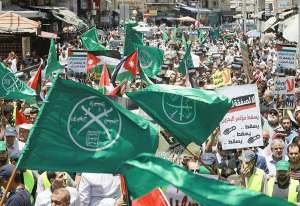 An Egyptian court sentenced 59 suspected members of the Muslim Brotherhood to 15 years in prison on Thursday for alleged involvement in a high-profile 2013 sit-in, a judicial source said.

Seven other defendants were handed five-year sentences following the latest mass trial in the government’s crackdown on the former ruling party, now blacklisted as a terror group.

The court acquitted 29 of the accused.

The charges related to a nearly six-week-long sit-in in the capital’s Rabaa al-Adaweya Square, triggered by the overthrow by then armed forces chief, now President Abdel Fattah al-Sisi, of his Islamist predecessor Mohamed Morsi.

Police cleared the square in an August 14, 2013 operation that killed more than 800 protesters, according to human rights groups.

Police have since rounded up not only the Brotherhood’s top leaders but also its rank and file, handing down death sentences or long jail terms after mass trials that have drawn condemnation from the United Nations.

The charges in the Rabaa trial included organising or participating in the sit-in, blocking roads and the murder of security personnel ordered to disperse the protest.

Those jailed can appeal their convictions, the judicial source said.

The Brotherhood has consistently denied any link to violence.