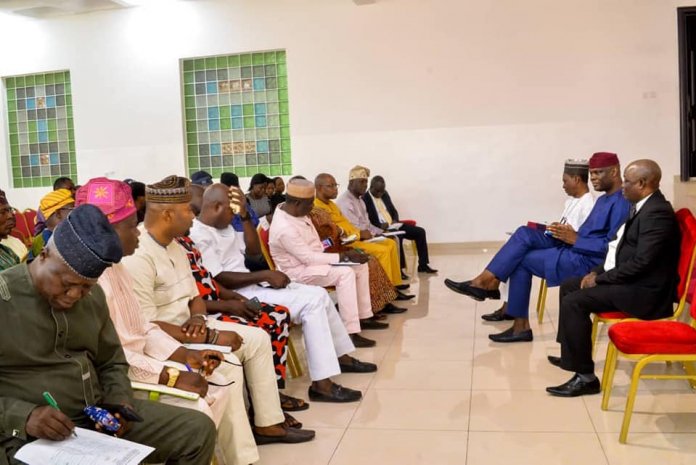 The Attorney General and Honourable Commissioner for Justice in Ekiti State, Mr Olawale Fapohunda has held a crucial meeting with all Chairpersons and Secretaries across the 16 Local Government of Ekiti State on Wednesday, 29th January, 2020.

The Meeting which was held at the Conference Hall of the Governor’s Office also had in attendance, the Commissioner for Local Government Service Commission, Professor Adio Folayan and the Secretary to the State Government, Mr. Biodun Oyebanji.

Olawale Fapohunda, while addressing the forum said the purpose of the interactive Section is majorly on Four ( 4) crucial issues:

1) The need for the Local Government Chairpersons to fill the Code of Conduct Forms for Public Officers;

2) The need to Sensitize people at the grassroot level on the provisions of the Ekiti State Property Protection (Anti Land Grabbing)Law, 2019;

3)Curbing the Menace of Sexual Violence in the State; and,

4)Referral of Legal issues across the 16 Local Governments to the Ministry of Justice Legal Advisory Unit.

The Attorney General and Honourable Commissioner for Justice advise the Local Government Chairmen and Secretaries of the importance and the need to fill the code of conduct forms for Public Officers accurately.

According to him,Local Government leaders need to be cautious of their position as Leaders in their various Local Government and stand out. They were advised to embrace Transparency,Honesty, High Integrity,which the John Kayode Fayemi Led Administration is noted for.

Olawale Fapohunda also informed the gathering on the need to Sensitize the People at the Grass Roots level to avoid sharp practices and illegal sale of lands because any offender would be strictly prosecuted.

The Honourable Commissioner for Justice lamented on the menace of Sexual Violence in the State.
According to him, “We are collectively scandalized. Our babies, girls, young and old Women must be able to walk the street free…”.
Fapohunda therefore made a Clarion call to the Local Government Chairmen that they should help in the campaign against rape. He said sex offenders would be named and shamed in the Community and also across the State.

The Honourable Commissioner also advised the Local Government Chairpersons to refer any legal issue confronting their Local Governments to the Ministry of Justice for Proper Legal Advise and Consultation.

The Commissioner for Local Government Service Commission, Professor Adio Folayan, while responding promised that the Chairmen and Secretaries would communicate the message of the Honourable Attorney General to the people at the grassroot level.

The Chairperson of Ado Ekiti Local Government, who is also the only Female in the Forum, Mrs Omotunde Fajuyi appreciated the Honourable Attorney General.

Omotunde Fajuyi however called on the Attorney General to make clarifications on the issue of taxation on land levies/ground rent, and also disparity on the issue of land conflict between the Local and State Government.

The Honourable Attorney General and Commissioner for Justice was accompanied by the Permanent Secretary and Solicitor General of the Ministry of Justice, Mr Lawrence Ojo, a Director in the Ministry, Mr. Gbemiga Adaramola, the Special Adviser on Media & Publicity to the Attorney General, Mr. Tunde Olaolorun, the Special Adviser on Legal issues, Mrs. Ronke Odetola and Mrs. Oluwaseun Olasanmi.

ALSO READ   Weird Types of Lawyers You Meet in the Courtroom