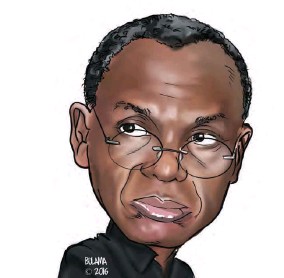 I have this Igbo friend whom I call Omo Oduduwa. He speaks Yoruba language with a competence that claps for whoever his teacher is – and he flaunts it. Every expression that shoots out of his trunk is rooted in wisdom. He once told me in Yoruba that his enemy was ill but he was the one taking medicine for the illness (ó re òtá mi sùgbón èmi ni mo nl’ògun). That statement I remembered when I read Professor Ishaq Akintola of Muslim Rights Concern (MURIC) assisting Kaduna State Governor, Mallam Nasir el-Rufai to cry because the Nigerian Bar Association (NBA) spilt his milk last week.

Akintola said the decision of the NBA to withdraw an invitation to el-Rufai to speak at its Annual General Conference (AGC) was a declaration of war. Some lawyers had earlier alleged that mercurial el-Rufai had “on several occasions abused the rights of Nigerians” and been disdainful of courts and their orders. Because of that, they vowed that he should not be seen addressing an assembly of freedom lovers. What will he be teaching us? They asked. The NBA NEC met and quietly borrowed itself some ‘sense’ by withdrawing the babanriga it decked the governor with. While utterly disappointed el-Rufai sulked and walked off it, an implacably angry Akintola of MURIC wouldn’t take it. He came out, emitting fire from his mouth and nostrils: “All lawyers from the North should …boycott NBA’s AGC in protest against this open declaration of war on Northern Kaduna,” Akintola said.

And as gross as that was, it still wasn’t enough for him. He had to add for effect that “every little action of injustice must spark a reaction if tyranny is to be stopped in the world. NBA has crossed the red line in human relations and conflict management. No single lawyer from the North should participate in the AGC either as a resource person or as a participant unless NBA rescinds its decision to drop el-Rufai from the list of speakers. Injury to one is injury to all.”

Let me quietly ask: Who is Akintola’s ‘all’? He didn’t define it.

When the MURIC man was giving that boycott order to lawyers from the North, had he forgotten that he was from Ile-Ife and not from Sokoto or Daura? In the pecking order known to Nigeria, no one from Akintola’s South is allowed to be that rude to the grand masters. Some lawyers in Kaduna, Bauchi and Jigawa who have indicated revulsion at NBA’s decision have not said Akintola’s MURIC gave them the inspiration to do so. A butterfly that counts itself a bird will have problems ultimately. I thought MURIC said its name is about Muslim rights! So, where is the correlation between el-Rufai’s abortive NBA outing and the religious rights of Muslims? When he said “no single lawyer from the North should participate in the annual general meeting,” was he speaking for Christian lawyers from the North too? Or this professor did not know that there are lawyers from the North who are not Muslims? And is Southern Kaduna not in the North with its own fair share of the membership of the NBA? Again, when he aligned himself so blatantly in support of Northern Kaduna, had he convinced himself that there was no Muslim in Southern Kaduna whose right deserved to be protected by the self-appointed Muslim rights enforcer? Or is the whole thing truly about buying and selling, business and profit? When religion becomes an item in the trader’s tray, even if the article is further encased in activism, it won’t take long for the simple buyer to regain his sense and lenses.

If you are accused of having stinking entrails, you pack well and tuck in your small and big intestines. That is a lesson from the NBA controversy. There are many Muslim groups in Nigeria, so why is this MURIC the one farting every hour? There is a problem with carrying someone else’s load on your head and dragging yours on the dusty road of life. Except it is naira and kobo business, I would insist that this group’s drivel is foolishness that has a parallel only in taking medicine for someone else’s headache. And anyone who is persuaded to do that should contend with side effects of inappropriate injection of, even, paracetamol. The wise won’t submit to errant physicians because they know that in this world, as someone noted, the doctor who prescribes a medicine can also be the ‘vulture waiting for the body’. Indeed, as said by Peter Latham, late English physician and professor of Medicine at the University of Cambridge, poisons and medicine are sometimes the same substance given with different intents. That is why all freeborn know what errand to run and what to run away from. I pray that Professor Akintola sticks strictly to the self-chosen mandate of MURIC – defence of rights of Muslims of Nigeria. Otherwise, he and his MURIC would be confirmed irritating to decency and commonsense.

But who really told the Ile-Ife born Lagos professor that this proud, brilliant Fulani called el-Rufai needed MURIC’s crutches to go to war so that he could win? Where was MURIC and its busybody laptop on July 15, 2012 when el-Rufai climbed the mountain top of Twitter to warn of the never-healing consequences of wronging the Fulani? He tweeted: “We will write this for all to read. Anyone, soldier or not, that kills the Fulani takes a loan repayable one day no matter how long it takes.” When you strip the nimble one naked as has just been done by the NBA, there are prices to pay. If a tree shakes, either a monkey or the wind is shaking it. The consequences are already manifesting in bar association branches; first in Jigawa, then Bauchi and Kaduna. Watch out for many more costly ramifications of that decision. The NBA will be lucky to live in peace and in one piece after this. The NBA politicians know this and are worried and have been propitiating the deity of vengeance not to land in their homes. Mr Paul Usoro, the NBA president who presided over the humiliation of the Fulani lord, has not only ‘dòbálè’, he has sworn before his victim that he was not among the bad guys who moved against the warrior’s participation at the lawyers’ talk shop. Wise Usoro washed his hands (and yansh) off the mess in carefully chosen words: “Those who spoke in favour of his attendance, including me, were in the minority. I was personally placed in a very difficult and problematic position.” I won’t call Usoro a coward. He is just wise. Every page of history contains paragraphs celebrating cowards who grew old in prosperity to tell stories of the ruins of the brave.

The Southern Kaduna crisis is el-Rufai’s own Chibok Girls headache. The governor of Kaduna ought to belong to everybody and to nobody in that crisis. That is the tragedy of the case. He is also unfortunately not firing at the Villa as he did in 2014 when the Chibok abduction rattled the whole world. On 26 May, 2014, el-Rufai called out President Jonathan and those he loved to call ‘Jonathanians’. In a combative tweet, he reminded Nigerians that “no one else other than Dr Goodluck Jonathan is the president of Nigeria today” and that “our collective security is his primary responsibility.” He demanded that Jonathan “should do his job or exit quickly so more capable hands can do it in his stead…” El-Rufai reminded the then government that “when an armed robber attacks you, you send law enforcement agents after him or her. You do not appeal that he or she brings back what he stole.” He told Jonathan’s supporters to “please stop the brainless buck-passing and appeals to BH to release our girls…” In 2014, today’s Kaduna governor did not spare the president of Nigeria over the killings and abductions of that era. Maybe he was right. But it is tragic that today, he pans away from the president, looks blankly into space in search of excuses and scapegoats for the killings in his state. If Jonathan’s 2014 was pretty bad, Muhammadu Buhari’s 2020 has been the very end of the world for many. But we are not hearing from Kaduna even a little of what it told Abuja six years ago.

Everett Hagen, Social Change scholar, speaks about the making of men of ‘rage’ who “neither seek affection of others nor are prepared to love them.” Most times, the image they evoke is that of a snake in the room – they induce fight and fright. Slimy and dangerous, it is only helplessness that tolerates them. Life should not be just about wars and warring; about undermining perceived superiors and lording it over inferiors. The NBA experience should teach el-Rufai some lessons in justice, temperance and the opposite of arrogance. He should see the crisis as a school he just attended; the fees were the ‘embarrassment’ of deplaning he suffered from the association. The certificate will be the more balanced, fair-minded public figure we expect to see out of the ashes of these bloody ‘loans’ and ‘repayment’ times. The lesson is that in all we do, we should always remember that no one is entirely powerful. The Zulu say a horse has four legs, yet it often falls. A president or governor with the power of life and death can be made to bite the dust, just like that, by an ordinary association – like the NBA.

Should Elevation Age to Judicial Bench be Pegged? – Abdulrasheed Ibrahim

Short Message Service (SMS) as a Means of Serving a Hearing...