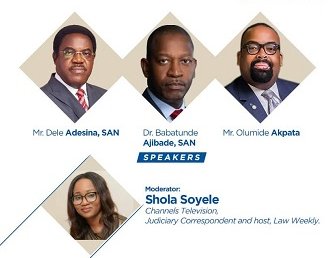 The Employment and Labour Lawyers Association of Nigeria recently held its monthly webinar with the three NBA Presidential Candidates on the topic: The NBA and the Welfare of Lawyers in Nigeria.

The Webinar which had Sola Soyele of Channels TV as moderator had in attendance about 300 participants.

Setting the tone of the deliberation was a poll which sought to find out the level of satisfaction of participating lawyers with the effort of the NBA on the welfare of lawyers. surprisingly, the polls returned a 100% dissatisfaction. This became the bedrock of the deliberations. The candidates highlighted their various ideas on how issue of Lawyers welfare should be brought to the front burner.

It is hoped that whoever eventually becomes the President of the NBA would take in the various suggestions made by the participants and harmonize them into a working strategy for tackling lawyers’ welfare in Nigeria.

ALSO READ   All FWLR This Week: Disclosure Of Proper Parties To Action; Condition Precedent To Jurisdiction Of Court